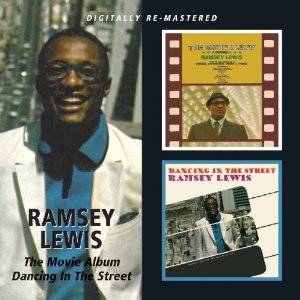 Good old Ramsey Lewis enjoys something of a mixed reputation amongst music critics and jazz pundits. The source of the contention is that he dared make jazz popular. In the 60s – first with Isaac “Red” Holt and Eldee Young and then with Cleveland Eaton and Maurice White – Lewis succeeded in taking jazz into the pop charts and ever since he’s continued his crusade to make jazz truly accessible – not just through his music, but via a whole series of syndicated jazz radio shows. The man’s released over 80 albums and here we have a twofer offering a pair of albums that were originally released in the early seventies and they are perfect examples of Lewis’ different styles and sounds.

For 1972’s ‘Upendo Ni Pamoja’ Lewis worked in a classic trio format – with Morris Jennings on drums and Cleveland Eaton on bass and, as on those hit LPs of the 60s, the repertoire has a strong focus on pop and soul hits of the time – The Stylistics’ ‘People Make The World Go Round’, War’s ‘Slipping Into Darkness’ and the Jackson 5’s ‘Got To Be There’. There’s a dip into gospel with a rolling version of ‘Put Your Hand’, a nod to the blues with a take on Percy Mayfield’s ‘Please Send Me Someone To Love’ and an interesting reading of Rodrigo’s ‘Concerto De Aranjuez’. Stand out though is the lengthy title tune on which Lewis shows why, for clarity on the Steinway, he has few peers. The set is a classic example of what we might call mid period Ramsey Lewis.

The sound on 1974’s ‘Sun Goddess’ is markedly different. Working with hugely innovative players like Charles Stepney, Richard Evans and old band mate Maurice White (who enlists various members of his Earth Wind and Fire outfit to help out), the feel of the 7 tracker is thoroughly contemporary – even experimental and it’s the White-penned title cut that offers the best illustration. It clocks in at over 8 minutes and features exquisite whispered, non lyrical vocals from Philip Bailey and the Whites – Maurice and Verdine. It’s essentially the same team that mine a loose groove on ‘Hot Dawgit’ while the gentler ‘Love Song’ is outstanding too. The album’s only cover is a respectful version of Stevie Wonder’s ‘Living For The City’ but again, the choice of a “difficult” song speaks for the direction Lewis was intending to go in… very different to ‘The In Crowd’ or ‘Hang On Sloopy’ and redolent of a new era Ramsey Lewis.

No matter which side of the Ramsey Lewis argument you’re on, there’s no denying the contribution and impact he’s had on the jazz world and these two excellent albums offer evidence that’s hard to dismiss.