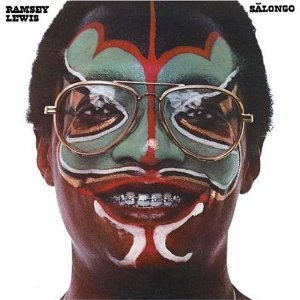 This attractively-packaged ‘twofer’ is the second release from the new UK-based reissue label, R2 – which is going to specialise in rare and collectable jazz and funk – and pairs a couple of ’70s albums by Chicago keyboard maven, Ramsey Lewis. ‘Funky Serenity‘ was recorded in 1972 for Columbia and is fundamentally a plugged-in Ramsey Lewis Trio record (though the violinist and percussionist, Ed Green, augments the group on a couple of numbers). Lewis, of course, rose to fame laying down churchy piano licks over catchy, finger-snapping, soul-jazz grooves in the ’60s at Chess Records’ subsidiary imprint, Cadet.

Come the early ’70s, though, and jazz had moved on and plugged into the mains socket. On ‘Funky Serenity’ Lewis is mostly playing Fender Rhodes electric piano – and also electric harpsichord – which succeeds in making his sound even funkier than it was in the ’60s. There are some strong covers of popular soul hits,  including an instrumental rendition of ‘Where Is The Love,’ plus jazzy reproductions of the slow ballads, ‘Betcha By Golly Wow,’ and ‘If Loving You Is Wrong I Don’t Want To Be Right,’ the latter a sultry Southern soul cheating song reconfigured into a bluesy late night jam. Punctuating these are some original compositions from the trio, the strongest of which is the pulsating ‘What It Is,’ which spotlights Lewis on acoustic piano and has echoes of his big gospel-infused ’60s hits like ‘Wade In The Water.’ What doesn’t quite hit the spot is a wild and spacey deconstruction of the Moody Blues’ ’60s pop smash, ‘Nights In White Satin.’

Listening to it now in 2012, ‘Funky Serenity’ sounds like a transitional record in Ramsey Lewis’s canon and seems to reflect the pianist’s quest to seek out fresh pastures and a new musical direction as he struggled to emulate his ’60s commercial success.  Significantly, by the time ‘Salongo‘ arrived in 1976, Lewis had ditched the trio format and embraced a new and larger band. By that time he’d collaborated with Earth, Wind & Fire for 1975’s ‘Sun Goddess,’ a slice of cosmic funky soul that took his music to a new audience. ‘Salongo’ was the follow up to the ‘Sun Goddess’ album and for it Lewis retained the services of producers Charles Stepney and EW&F’s Maurice White (the latter a former drummer for the pianist).

Though it failed to yield a big hit single, ‘Salongo’ further explored the large canvas musical palette that had distinguished ‘Sun Goddess.’ In fact, it’s a more adventurous offering, blending soul, funk and jazz with Latin and African influences. The propulsive opener, ‘Slick,’ is an exciting slab of big band funk that rides on a Latin groove and which sounds like a companion piece to Earth, Wind & Fire’s ‘Runnin’.’ There’s an even stronger EW&F vibe present on the African-tinged ‘Aufu Oodu,’ which possesses a Maurice White-like vocal, while its groove, horn charts and chord-changes are reminiscent of ‘Serpentine Fire’ (a track that EW&F would record in 1977). The syncopated ‘Brazilica’ – which was released as a single from the set – has a similar driving feel and Latin undertow. In fact, ‘Salongo’ in some ways seems like a rehearsal record by Maurice White for EW&F’s 1977 magnum opus ‘All ‘N All’ – many of the musical elements are similar, even down to orchestral interludes, exemplified by the Charles Stepney-penned ‘Rubato.’

Overlooked for many years, both these albums – which have been a rich source for hip-hop samples in recent years – are in circulation again thanks to R2. They are well worth revisiting, especially the widescreen jazz-funk extravaganza that is ‘Salongo.’