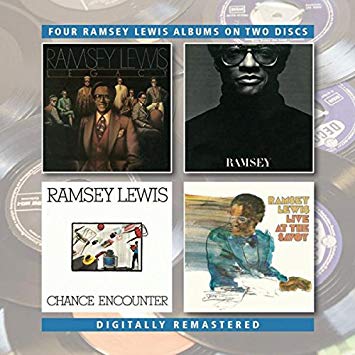 The great Ramsey Lewis is a black music pioneer. His work at Chess between 1956 and 1972 was truly ground breaking and secured him a place for all time in the jazz pantheon. His ‘Hang On Sloopy’, ‘The In Crowd’ and ‘Wade In The Water’ remain classics and are staples of every proper jazz station. In ’72, though, Lewis left Chess for Columbia and though his time at the major was maybe not quite so significant, it did yield plenty of quality jazz, crossover and fusion – notably the incomparable ’74 ‘Sun Goddess’ album.

Lewis was prolific at Columbia where he released just over 20 long payers and over the years most have been reissued. Continuing the trend, BGO have just re-released four of ’em in a double CD pack. There seems to be no real logic behind the four choices…. ‘Legacy’ (1978), ‘Ramsey’ (1979), ‘Live At The Savoy’ (1982) and ‘Chance Encounter’ (1982) save that they show the keyboardist’s breadth, versatility and commitment to quality.

’78’s ‘Legacy’ is the first up in this pack and it represents one of Lewis’ most ambitious ventures. Working with producer James L Mack, he wanted to create a bridge between jazz and classical music and using a tight, disciplined framework they crafted longish pieces under the familiar classical headings toccata, adagio and fugue.

‘Ramsey’ from the next year was again part produced by Mack bur represented a return to what most people expected from Ramsey Lewis. The third album in this package, ‘Live At The Savoy’ is even more “Ramsey Lewis” and harks back to those groundbreaking Chess sets in more ways than one – he even reprises his three biggest Chess hits for the audience at New York’s swanky Savoy Theatre.

The last of this set’s albums is ‘Close Encounter’ from 1982 – a workaday affair enlivened by a Fender Rhodes-led version of ‘What’s Going On’ and a cover of ‘Up Where We Belong’ which features vocals from Morris Gray and Pat Shannon.

The sleeve notes for this four album set come from our very own Charles Waring. He tells you everything you need to know (and a lot that you thought you didn’t need to know!) but even he would, I’m sure, agree that maybe these particular long players aren’t vital or crucial to understanding Ramsey Lewis. Nevertheless, great to have them back in circulation.