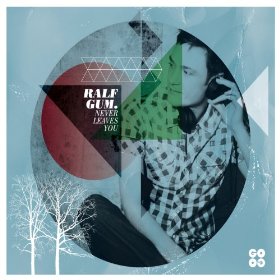 Ralf Gum hails from Germany. But the uber DJ/producer now resides in South Africa where he’s constantly working the numerous super clubs on the Motherland’s burgeoning scene. He takes time out though to grace the world’s top dance venues – everywhere from the States to Japan and Ibiza… and don’t forget his stints at the good old Southport Weekender. He makes his own music too and his 2008 long player ‘Uniting Music’ was hailed as a soulful house classic. At last he’s released a follow up (on his own Go Go Music label) and it’s every bit as good as that exceptional debut.

Unlike many soulful house sets where affairs are driven by the demands of the rhythm, on ‘Never Leaves You’ Gum allows his songs to take centre stage and because of that the music will find appeal right across the soul and dance spectrum. What’s more our man’s status in the world of soulful house is such that he can call in plenty of big name vocalists to help him deliver. Amongst the featured singers on the 10 tracker are Kenny Bobien, Monique Bingham, Robert Owens and the incomparable Caron Wheeler. The doyenne of Soul II Soul takes lead on the driving ‘So Good’ and she’s so effective that it sounds like she’s been a house diva all her career. The song is a heavy dancer in the same vein as the cut that precedes it – ‘Fly Free’ . Vocalised by Robert Owens, it’s easy to hear why Gum’s picked it as the album’s lead single. The song is already a hit in South Africa and winning multi plays in the world’s best dance arenas.

Another of the LP’s stand outs is the floater that is ‘The Only Way’. Here the vocalist is Kenny Bobien and once again he shows his incredible, gospel-honed vocal range. He’s upfront on another goodie – ‘Greater Love’. Elsewhere some newer names turn in excellent performances – none better than new soul singer Jon Pierce. He duets with Kafele on the album’s closer – the lazy summer groove, ‘Never’- complete with a fine and full brass section. Most impressive vocal however comes from France’s Jocelyn Mathieu. She opens proceedings with ‘Everything’ – a quite stunning confection that sums up where Ralf Gum is coming from. It marries a full-on soul vocal with a sophisticated arrangement and production to create a tune that has the potential to become a modern soul anthem and a soulful house classic in the way that some of those great Drizabone tunes did. You’ll ignore it at your peril!