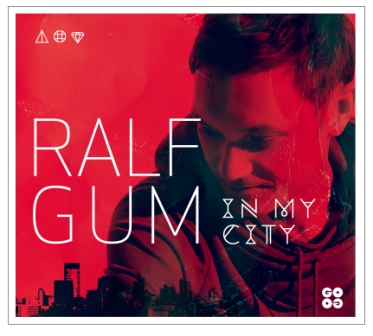 Ralf Gum is a German music maker/DJ/producer who’s been on the scene since the early 90s. He now lives in South Africa – a country which he freely admits is “the most vibrant dance nation I know globally”. He constantly works that country’s big dance clubs but he also graces venues worldwide. Ralf’s big in the States, Ibiza and, of course, Japan! He’s also starred at any number of Southport Weekenders and in 2008 he released his first album – ‘Uniting Music’, a set that cemented his position at the top of the soulful house tree. It was followed in 2012 by ‘Never Leaves You’. The LP, released on Ralf’s own GoGo Music label, developed the music ethos established on ‘Uniting Music’; that’s to say that Mr G puts the song (rather than the rhythm) at the centre of his work and the end result, though madly satisfying dance-wise, is much more credible and enduring than most soulful house artefacts.

It goes without saying that ‘In My City’ continues that “song first” philosophy and each of the album’s 10 cuts all have something special to offer. Ralf opens proceedings here with a trump card – a rather lovely tune called ‘With Her Hand’. With just a whiff of Afrobeat about it, it’s a classic slab of soulful house with a laconic, laid back vocal from a certain Hugh Masekela. The South African horn legend is a friend of Ralf’s and he jumped at the chance of collaborating. His vocal is a delight; ditto the horn parts and just wait till you get to the killer hook in the chorus. Hugh helps out on one more track … ‘In The City’. This song deals with the problem of over-population and musically it’s much more afro centric.

The album’s focus Afrobeat tune though is ‘Bi ‘na ba n’jo’ . Here the vocalist is Dele Sosimi, a young London singer, whose previous credits include work with Fela Kuti. Other guest artists include Monique Bingham and Omar. The London soul man is on top form on ‘Love Core’ – a bumpy little shuffle that becomes the sweetest of rides. ‘A Brighter Dream’ is another album highlight. Here the vocalist is the subtly toned Kafele while another old collaborator, Jocelyn Mathieu, does a great job on ‘Our Love Is A Star’.

Ultimately, though, these singers are only as good as the songs they have to work with and here Ralf Gum has given them some wonderful ammunition. Like we said up top, on this album everything is “song-driven”- just like all the best soul-associated music.

Ralf Gum ‘In My City’ album will be released worldwide October 6th 2014 on GOGO Music.