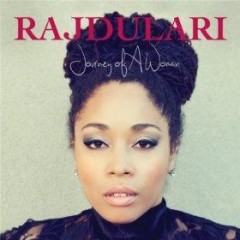 Church-raised (yes, it shows), Rajdulari is a New York-based jazz singer who inflects her approach with neo/nu soul flavours. She debuted couple of years ago with ‘Honey Wine’. The title cut became one of Amazon’s top mp3 sellers while the buzz on the album found Rajdulari plenty of work on the live circuit. She’s just released her sophomore set and ‘Journey Of A Woman’ is constructed from the same musical flavours as the debut. That’s to say that it’s essentially a jazz vocals set (Rajdulari grew up listening to Sarah Vaughan and Ella Fitzgerald) with generous helpings of neo-nu soul in the manner of Jill Scott (rather than, say, Erykah Badu).

Hear that mix at its best on the two opening cuts – ‘Journey Of A Woman’ and ‘Natural’. Like Jill Scott in her early days the songs are self-affirming, biographical explorations detailing how our girl’s going to make it – despite obstacles in the way. ‘Natural’ in particular is a strong tune – no wonder it’s been selected as the lead single. Ms R proudly proclaims, “I’ve never been a skinny girl. I got curves you could see right around the world. But I’m a real strong sister, with a real strong dream” … and in various forms that’s the message that she hammers home throughout the album.

The introspection is gentler on ‘Peace’ and the light floater that is ‘Dance With Me’. ‘Real Love’ and ‘Open Air’ are plaintive ballads while Rajdulari shows her real jazz licks on the bustling ‘Miracles’ and the meandering ‘Black Gyrl’ –that one features great trumpet from Travis Antoine. The album also boasts two interesting covers. First there’s a twist on Mtume’s ‘Juicy Fruit’ – renamed here ‘Juicy’. The old Weekender classic is given a doleful reading – quite at odds with the laid back, sensual joy of the original. The melancholy is cranked up by a funerary violin passage from Monique Brooks-Roberts. The same violinist features on the second cover, a version of Tina Turner’s ‘What’s Love Got To Do With It’. Here, the violin figure weaves between the singer’s scat vocal giving an intriguing twist to something very familiar. But, as with ‘Juicy’, I don’t think it comes off. As ever, though, please make up your own minds… investigate @ www.rajdulari.com