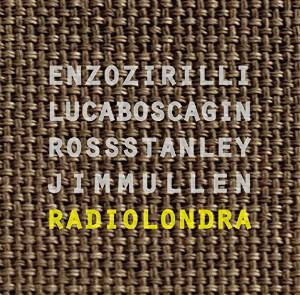 Radio Londra is a new jazz quartet – but its four members are all seasoned veterans. The combo was the brainchild of Italian drummer Enzo Zirilli who runs a UK/Italian musicians exchange scheme. For Radio Londra he’s paired guitarists Jim Mullen and Luca Boscagin and added keyboardist Ross Stanley.

Mullen, of course, is a seasoned veteran with a CV that goes back to the 70s; Boscagin began his career in rock but is now regarded as one of Italy’s top jazz men with three solo albums under his belt; Stanley is a an in-demand UK jazz session player; while instigator Zirilli has worked in both Italy and the UK and though a quartet, the music which Radio Londra craft has all the feel of the great soul-jazz organ trios of the 60s with that second guitar adding a special, extra dimension.

As was often the way with many albums of the classic soul-jazz era, Radio Londra’s repertoire is based around their takes on others’ material – and they mix jazz standards and well-known pop and soul hits on the album. Perhaps the most striking cover is a languid treatment of the Rolling Stones’ ‘Satisfaction’ which is a million miles away from the cock-sure strutting of the original. Jagger, though, would, I’m sure approve; ditto, co-author Keith Richard who’d marvel at the two distinct guitar styles – Boscagin’s precision and Mullen’s thumb-driven soulfulness. A swinging take on Earth Wind And Fire’s ‘After The Love has Gone’ is another album highlight –evoking all the atmosphere of those smoky, 60s cellar clubs. Other featured tunes include Dave Brubeck’s The Duke’. Michel Legrand’s ‘You Must Believe In Spring’ and Hoagy Carmichael’s ‘Stardust’.

The big original number is ‘Us 4’. Written by Boscagin, it has a hint of ‘My Cherie Amour’ about it but it does allow all four band embers to shine.

‘Radio Londra’ is released on Trio records on January 26th.