R KELLY; Write Me Back (RCA) 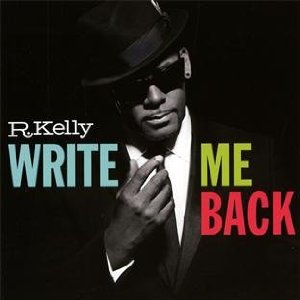 R. Kelly knows and loves his soul history and he often dabbles in the retro. In places his last LP, the wonderful ‘Love Letter’, paid homage to soul’s heritage and now our man’s gone the whole hog and created a fabulous, totally retro collection that’s steeped in the delicious flavours of soul’s glorious past. He make his intentions clear from the off with ‘Love Is’ – a mover and groover with Barry White stamped all over it. Dip in anywhere, though, and you’ll be overwhelmed by what Kelly’s produced –and let’s make it clear he’s not copying the past in a cheap, throwaway karaoke way; rather he’s takes key stylistic elements from soul’s back pages and gives them a 21st century, R Kelly twist. For example ‘Feelin’ Single’ might remind you of Bill Withers’ ‘Lovely Day’; ‘Fool For You’ has a hint of the Hi studio sound about it; the beautiful stepper that is ‘Share My Love’ could be a classic Gamble and Huff production; while the vocal infections on ‘You Are My World’ are taken from the Michael Jackson song book. But despite those similarities, it’s R Kelly not Withers, Green, Rawls or MJ who delivers …and delivers in his own very, very distinct way. Hear that way in its purest form on the LP’s standout – the ab fab ‘Believe It’s So’. The tune clocks in at just over 6 minutes and it’s a delight. It has light, lithe samba rhythms, a lilting melody and it’s beautifully presented – think a combination of ‘Love Street’ and ‘Happy People’. I doubt you’ll hear a better tune this year.

The album also boats a fair sprinkling of ballads too – most of ’em dramatic, though not as overwrought as ‘I Believe I Can Fly’. Best of the bunch is the simple doo-wop throw back that is ‘One Step Closer’. Add to that a few oddities – the poppy ‘Party Jumpin’ and a 50s R&B/R&R belter, ‘All Rounds On Me’ and you have a heady cocktail of an album that at year’s end most serious soul fans will readily nominate as 2012’s very best.