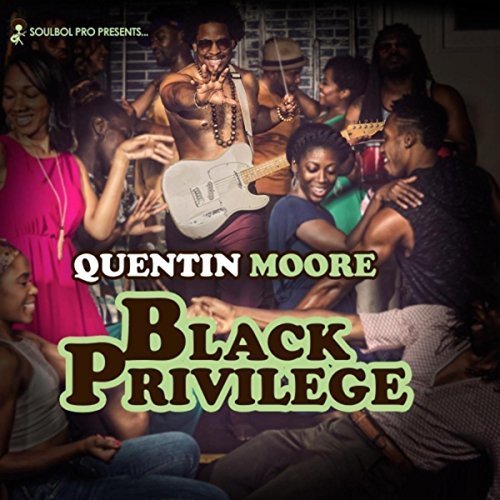 Quentin Moore is a hard-working soul man from Austin, Texas. When we got to know him a few years back the enthusiastic and youthful Quentin told us that his musical mission statement was to keep old school soul alive. He calls himself the “last Mohican of Southern soul” and his recordings (especially his special Valentine’s Day releases) have borne that out – flavours of Sam Cooke and Bobby Womack… indeed he once offered a great cover of Bobby’s ‘That’s The Way I Feel About Cha’.

‘Black Privilege’ is his latest outing and it offers more of the same uncomplicated, homespun soul flavours – the kind of music that conservative, southern soul fans complain is made too rarely in these techno, electro obsessed days. Nailing his credentials to the mast, here Mr Moore is brave enough to cover an Al Green classic – ‘Simply Beautiful’ and his treatment, though different to the Reverend’s original, retains all the soulful melancholy tinged with hope. Indeed that mix of despair and hope is one of the album’s recurring themes. Time and time again, he tells us that times are hard, moneys tight and there’s a head case in the White House, but when he’s with his girl everything’s brighter… so he wants to dance with her (‘I Need To Dance’), he loses himself in the party ethic (‘Party Drugs’)… and so on. By the way, neither of those cuts, despite their titles, are full on dance or party tunes! Both interesting.

Even more intriguing is ‘Peter Norman’. Athletic fans and/or students of black history will know that Peter Norman was the third person on the medal podium with Tommie Smith and John Carlos after the 200 metres race in the 1968 Olympics. Norman (who was white) supported Smith and Carlos’ podium protest and here Moore gives him full honours – “our hero” and “a man of courage” for standing with his sporting brothers. The soundscape on the cut is blaxploitaion à la ‘Superfly’ and fans of the genre will find more to enjoy –like the instrumental ‘Enough Is Enough’.

Elsewhere there are plenty of rough shod bluesy funk workouts but the outstanding track is the ballad ‘I Can Never Stop Loving You’ – a big production with duet input from a very soulful Maya Azucena… good, old fashioned (as opposed to retro) soul and the whole album is worth checking by followers of the genre.