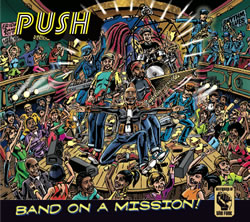 London-based band Push is hardly a household name on the soul circuit, but between them the various band members boast an impressive collective CV. The band’s roots go way back the London underground club scene of the late 80s where funk and soul-jazz ruled the roost. Drummer Crispin Taylor, bassist Ernie McKone and guitar man Mark Vandergucht, for instance, were the rhythm section in Galliano. That threesome also found time to support visiting US stars like Candi Staton and Marlena Shaw while other band members have worked with the likes of the Style Council and Seal. The majority of this Push line up was a big part of the whole rare groove and acid-jazz scene and earlier this year the band supported George Clinton and Funkadleic while band players Toby Baker and Ernie McKone worked with vocalist Gary Poole to record a well-received modern soul album as Soul Talk on the Expansion label.

Now a seven piece and fronted by vocalist Daniel Pearce (an ex-X Factor boot camper), Push have just launched this – their latest album on which they deliver their own brand of contemporary soul and funk with more than a nod to the venerable roots which we’ve just outlined. Throughout, the music is solid and convincing though I guess the album’s big attraction is the presence of two great guest vocalists – Candi Staton and Hamish Stuart. The soul queen fronts ‘Where I’m At’. It’s a rolling old school soul tune that sounds like it could have been recorded in Muscle Shoals back in the day… but, of course, it wasn’t. Stuart takes lead on ‘Long Gone’ which rides in on a ‘Papa Was A Rolling Stone’ style bass line before building into a blaxploitation groove. Indeed there’s a lot here that recalls the best of that genre. The instrumental ‘Walk In The Park’ could’ve strode right out of ‘Shaft’ while ‘Rolling Out’ is slow rumble of a cut with some great piano from either Mike McEvoy, Toby Baker or ex Style Councillor Mick Talbot … it doesn’t say.

Elsewhere the LP’s predominant flavour is funk … and the tight, rigidly syncopated funk of the Average White Band – no wonder Hamish Stuart had few doubts about coming on board. The title track is a great example – and young Pearce sounds truly convincing on it. ‘The Blast’, ‘The Punch’, ‘Good Good Thing’ and ‘Pushing It’ are all busy funk bustlers too though ‘Better Believe’ takes things a little slower while the John Handy-ish ‘Back To The Funk’ is maybe the most adventurous track. The album’s topped and tailed with brief interludes and  if the band’s mission was to deliver an effective funk package – they’ve succeeded.