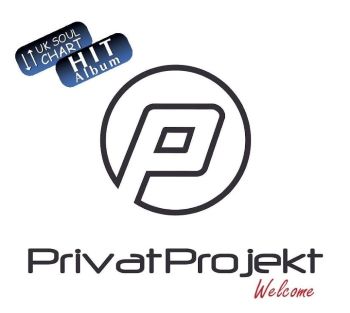 During 2020 we became familiar with the work of German soul collective, PRIVATPROJEKT (that’s how they like the name to look, by the way!). Based in Hamburg (now there’s an important music city!) the outfit are marshalled by Michel Reckhard – a proper music multitasker…. he plays synthesizers, keyboards, drums, and percussion; he’s also adept at programming and song writing. He tells us that his passion is soul music. His regular associates (soul fans too) are multi-instrumentalist, Alexander Precht and guitarist Jens Salsa. To help them deliver their ideas they use a number of different vocalists, including Bonny Ferrer, Andrea Weiss, Lay G, Stefanie Schwandt and Eniola Falase.

Back in January 2020, they released a mini album to whet our appetites and over the year despite the pandemic and the problems that causes the band released a string of singles like ‘Only Heaven Knows’, ‘Don’t Walk That Way’ and ‘Marvin’. They were all UK soul chart riders. Indeed ‘Don’t Walk That Way’ became a huge hit and won two fab remixes – one from J*Ski, the other courtesy of the ever-consistent Nigel Lowis

Now PP have just released a full, 15 track album – confusingly called ‘Welcome’ – the same name as their early 2020 smaller collection and to add a little more confusion this new one kicks off with the track ‘Welcome’ which also started the older album! No problem, though, it’s a great opener and kind of explains sonically and lyrically the whole PrivatProjekt thing. Sonically that “thing” is an “up” and optimistic European take on the modern soul idiom. Slickly produced, well-crafted songs, sweet melodies, insistent, foot-tapping and head nodding rhythms, the music makes few demands – but there’s nothing wrong with that, especially in these fraught times. What’s wrong with a generous dose of optimism and dreaming of better times? All praise to Herr Reckhard and his team for offering a little musical escapism.

Followers of the UK Soul Chart and/or PrivatProjekt will be familiar with many of the songs here – like ‘Marvin’ (the song was inspired by a dream about Marvin Gaye) and ‘Don’t Walk That Way’ (presented here in its original and Nigel Lowis mixes) and most of the other tracks use the same “good time” music template. The ones that stray a little (not too much though) from that sound are the slightly slower ‘You Make My Day’ and the jazzier ‘All In Me’ but both are great modern soul artefacts with hints of Drizabone. Indeed, the whole collection has that same kind of warm, welcoming, catchy modern soul sound and little wonder it’s already scaling the UK soul chart!