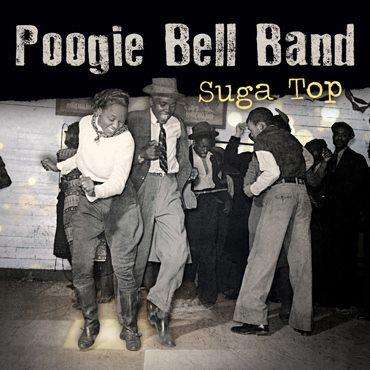 Poogie Bell is a Pittsburgh-born drummer. His father was the jazz pianist Charles Bell who made a living playing the clubs of Pittsburgh’s Hill District – known to its residents as Suga Top. Young Poogie, obviously, was going to be a musician and he eventually cut his teeth in the road band of Marcus Miller before moving on to gigs with people like Tom Browne, Chaka Khan, David Sanborn, Hugh Masekela and Erykah Badu.

‘Suga Top’ is Bell’s fifth album as a leader and as the title suggests it’s an unashamed homage to his roots and influences. To help him deliver, he’s surrounded himself with some top side people – amongst them keyboard player Bobby Sparks, sax men Chris Hemingway and Keith Anderson and trumpeter Patches Stewart and as lead vocalist he’s recruited a sinuously-voiced Mey – who sounds like she’s come straight out of one of Suga Top’s gospel churches… in fact she comes from Bulgaria! She takes lead on the wonderfully-lithe ‘Candy Bar’. It’s a tight little mid-tempo beater with an ultra catchy chorus hook that name checks Chaka Khan (one of Poogie Bell’s old bosses – a nice touch). She’s there on ‘Rain’, ‘Without You’ and ‘The Other Side Of The Game’ – all three loose and meandering with the nu-soul shades of another Bell pay mistress – Erykah Badu. ‘Uncle Roy’ is another vocal, but here it’s chiefly a vocoded Brett Williams who chants the famous Roy Ayers “get down in the sunshine” line. ‘Haven’t You Heard’ is another 80’s throwback. The Patrice Rushen cover is bright and brash and features more vocoder.

Most of the instrumentals have the feel of prime time David Sanborn about them – so you’ll realize that though the music might be filed under “smooth jazz” there’s nothing “lite” about it. Try the lovely ‘This Sunday’, ‘Max And Winston’ or the opening ‘Greasy Chicken Scratch’ to hear what I mean. ‘One Love’ is different again – a call to reflect about where we’re going as a society. Here Bell allows his players to stretch and express –as indeed he does throughout. Yes, he’s the leader – but his drums never dominate – making ‘Suga Top’ a wonderful team achievement.