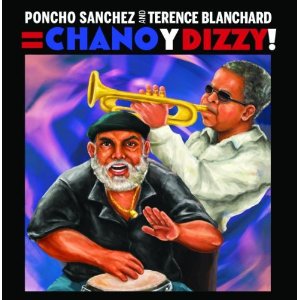 Originally from Laredo, Texas, the hirsute Poncho Sanchez – who’s just reached his 60th birthday – is a Latin percussionist non pareil. Renowned for his rhythmically deft conga work, Sanchez got his big break as a youngster playing in the band of Latin vibraphone maven, Cal Tjader, who mentored the young percussionist. After Tjader’s death in 1982, Sanchez led his own groups and in 1999, the prolific percussionist – this is his umpteenth album for Concord, who he’s been with since 1983 – scooped a Grammy for his album ‘Latin Soul.’

Conceptually, this latest opus from the affable conguero is a homage to fellow conga man, Chano Pozo, and trumpeter, Dizzy Gillespie, who together inked the blueprint for Latin jazz with their exciting musical collaborations in New York during the 1940s. As a result, the core of the album’s material consists of songs that Pozo and Gillespie recorded together and which were the first authentic expressions of a Latin-jazz hybrid. The set kicks off with a superb Chano Pozo medley that seamlessly segues renditions of the Latin jazz classics, ‘Tin Tin Deo,’ ‘Manteca,’ and ‘Gauchi Gaoro,’ together. Sanchez’s well-oiled band is augmented by the super-talented trumpeter, Terence Blanchard, who takes on Dizzy Gillespie’s role and brings a wonderful tonal quality to Sanchez’s music. Two Dizzy staples – ‘Con Alma’ and the bebop staple, ‘Groovin’ High’ – are given a fresh new Latin twist and in addition, members of Sanchez’s band (which includes Ron Blake and Francisco Torres) provide a clutch of newly-penned numbers that are arranged and played in the spirit of the album’s Latin jazz theme. The best of these is arguably ‘Harris’ Walk,’ Ron Blake’s tribute to jazz man, Eddie Harris.

To sum up, ‘Chano Y Dizzy’ is a fabulously piquant Latin jazz confection from Poncho Sanchez and it won’t be a huge surprise if he snaps up another Grammy for his efforts.

LOOK OUT FOR SJF’S INTERVIEW WITH PONCHO ZANCHEZ COMING SOON…