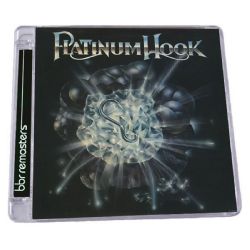 bbr’s latest Motown reissue is Platinum Hook’s debut, eponymous album from 1978. The group came to Motown via their links to the Commodores – the two bands shared the same management -and it seems that to keep the Commodores sweet, Motown exec, Suzanne DePasse signed their seven piece, New York-based protégés.

Platinum Hook had been a big draw on the New York live scene (residents at the famous Cellar club) and with a feisty, femme lead, Tina Renee Stanford, critics made obvious comparison to Rufus and similar funk combos. Listening to their debut set bears out that comparison; Cuts like ‘Standing On The Verge’, ‘Hooked For Life’, ‘Gotta Find A Woman’ and ‘City Life’ are meandering soul and funk workouts with a definite whiff of Chaka Khan about them. Though, if you listen a little harder to, say, ‘Gotta Find A Woman’ you might hear a little more sophistication in the arrangements… very Blackbyrds, that one.

The long player boasted some sweet ballads too. ”Til I Met You’ is quite lovely – a mix of Anita Baker and Phyllis Hyman while ‘Lover What You’ve Done To Me’ is worth a slot on any Quiet Storm radio segment.

Sadly for Platinum Hook the album made little commercial impact and the released singles fared no better. The group blamed Motown’s failure to put some muscle behind its promotion. They claim that the company concentrated on similar sounding, Switch and therein they nail the real reason for lack of success. At the end of the 70s there were just too many bands peddling this kind of music. To be successful what you had to offer had to be exceptional. Nothing here is. The 8 tracker album was decent of its kind – but there was just too much “of this kind”.

Platinum Hook left Motown in 1983 for RCA but the momentum had waned and after their shared manager, Benny Ashburn, died of a heart attack the group dissolved with various members going into session work. Platinum Hook – another case of what might have been!