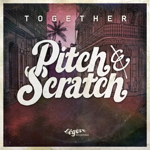 Pitch and Scratch are a Germany-based production duo consisting of DJ Suro and Mzuzu. Suro is a major player on the German club circuit and he’s worked with people like Talib Kweli, Marva Whitney, Dilated Peoples, Grandmaster Flash and Biz Markie. Mzuzu is also a DJ… and a “proper” musician to boot! Classically trained, he founded the Superbad Band in 2004 which has supported artists like Lyn Collins and Blowfly. Working as the duo, Pitch and Scratch, Suro and Mzuzu released their first album in 2009. ‘Hamburg Hustle’ was an instumental set that mixed 70s style funk and soul with hip hop beats and was hugely successful in the soul clubs and bars of Northern Europe.

Here the duo return with ther second album for which they’ve drafted in some fine soul vocalists. First up is Wayne Martin who features on the wonderful down-home ‘Papa Never Was A Genius’. The New Orleans-born singer brings a world weary, soulful quality to a sparse funk track that realy does sound authentically 70s. Different again are two cuts featuring Brazillian singer Leila Pantel. Both ‘Maculele’ and ‘Vem Meu Bem’ cleverly mash scratchy funk with Latin sensitivities. The other big vocal features Alex Prince. Fiesty’s the word here as she brings real grit and determaintion to the aptly titled ‘Funk Is Ruling My Head’. The pacey ‘Breaker’s Delight’ is possibly the best of the instrumentals while for variety the duo include a rap track – ‘Pitch And Scratch Me’ features London rapper Seanie T and its rough, London rhyming sounds out of kilter with the rest of the set. It’s a million miles away from the wonderful ‘Papa Never Was A Genius’ which is well worth checking out. Find out more @ www.legere-recordings.com