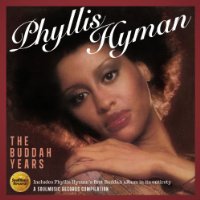 After her appearance re-fashioning The Stylistics’ ‘Betcha By Golly Wow’ on drummer/producer Norman Connors’ ‘You Are My Starship’ album in 1976, up-and-coming Philly songbird Phyllis Hyman – then just 28-years-old – was considered hot property by R&B tastemakers in the USA. A couple of 45s for US indie labels around the same timeframe hadn’t done much to advance the chanteuse’s career but her signing with Buddah Records represented a massive step forward and in 1977, Hyman’s self-titled debut LP proved that she had the talent to match the hype and her model good looks.

It’s a big risk for a vocalist to allow a full two-and-a-half-minutes to pass on the opening track of their debut album before opening his or her mouth to sing but that’s exactly what Phyllis Hyman did on the symphonic ballad, ‘Loving You Losing You,’ an epic Thom Bell-Linda Creed song produced by Jerry Peters. The delayed vocal just adds to the sonic drama and heightens the anticipation of hearing Hyman’s delicious voice, which has an expressive depth and exudes level of sophistication that most R&B singers can only dream of. From the cathartic pathos and tragedy of ‘Loving You Losing You’ follows the blissful jazz-tinged balladry of ‘No One Can Love You More,’ a gorgeous cut that features obligato saxophone from Gary Bartz. Featuring nine tracks in all, the album was a stunning showcase for Hyman’s vocal virtuosity and its variety – ranging from sultry ballads to disco-funk – underscored the singer’s versatility.

This fabulous compilation includes Hyman’s complete Buddah album and is appended with four other tracks that the singer recorded for the label – ‘You’re The One,’ ‘Soon Come Again,’ and the beautiful ballads, ‘Be Careful (How You Treat My Love)’ and ‘The Answer Is You.’ This quartet of tunes first appeared on a European Buddah LP ‘Sing A Song’ and later turned up on Hyman’s next album – and her first for Arista, who inherited her contract when the company took over Buddah – 1978’s ‘Somewhere In My Lifetime.’ Sadly, Hyman’s own lifetime was a tragically short one – she took her own life aged 45 in 1995 – but this valuable reissue is an eloquent reminder of the unique artistry of one of soul music’s most distinctive voices.