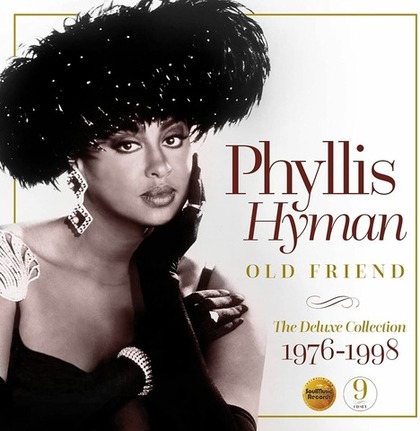 Is there such a thing as a desert island box set? If there is, then this superlative compendium of recordings by Phyllis Hyman, which has been lovingly assembled by David Nathan’s SoulMusic label, is at the top of this particular writer’s list. Sadly, Hyman is not a familiar name outside of the realm of soul and jazz music but she possessed an exquisite, instantly recognisable, soul-soothing voice that deserves a place in the pantheon of all-time great vocalists. Though it would have been her 72nd birthday on July 6th 2021, Hyman left us early in tragic circumstances; dying by her own hand at the age of 45 in 1995. Thankfully, her musical legacy has given her a degree of immortality that will keep her name alive for future generations.

Spanning 22 years, ‘Old Friend’ begins by taking us back to the late 1970s when Hyman’s career began. Her self-titled debut album for the Buddah label, released in 1977, revealed that even as a debutante, Hyman was no work-in-progress or ingénue; she was already an assured, fully-formed and polished performer whose vocal talent shone on symphonic anthems (‘Loving You, Losing You’),  languorous jazzy ballads (‘No One Can Love You More’) and peppy disco outings (‘Deliver The Love’).

Hyman dug into a deeper disco vein on 1979’s ‘You Know How To Love Me,’ which hooked her up with the hot production duo  James Mtume and Reggie Lucas. The set’s title track, with its throbbing dance pulse, remains one of Hyman’s most popular numbers, but in 1981, she brought in Norman Connors (who she’d worked with before signing to Buddah) to helm half of ‘Can’t We Fall In Love Again,’ whose title track was an impassioned duet with Michael Henderson.

‘Goddess Of Love’ in 1983 was the first Hyman album to reflect the rise of machine technology in R&B and found her being directed by rising pop producer, Narada Michael Walden. He pulled all the stops out on the funky dance track  ‘Riding The Tiger’ but Hyman impressed most on the gorgeous ballad ‘Why Did You Turn Me On,’ on which a real rhythm section prevailed.

Hyman’s relationship with Arista was not a happy one – she was rumoured to have fallen out  with Clive Davis, who purportedly made life hard for the singer – but after a three-year hiatus, the statuesque singer returned on Kenny Gamble and Leon Huff’s revived P. I. R. label for ‘Living All Alone.’  It also included input from noted Philly producers Thom Bell (‘Slow Dancing’), Dexter Wansel (‘Living All Alone’) and Nick Martinelli; the latter produced three cuts, including the set’s single, ‘Ain’t You had Enough Love’ written by the UK soul trio Loose Ends.

Hyman remained on P.I.R. for 1991’s ‘Prime Of My Life,’ which was notable for being her first foray into hip-hop music with the New Jack Swing-influenced ‘Don’t Wanna Change The World,’ which featured a rap section and topped the US R&B charts. It was on the slower songs, though, – like the majestic title song co-written by Preston Glass – that Hyman showed her interpretive skills, making you believe that she had lived every lyric she sang.

On June 30th 1995, Hyman, who was diagnosed with bipolar disorder,  took a fatal overdose of pills and alcohol just a few hours before a scheduled performance at the Apollo Theater. Five months later, the first of two posthumous albums appeared; ‘I Refuse To Be Lonely,’ which was followed three years by ‘Forever With You,’ both on P.I.R. They complete what is a stupendous package that is bolstered by a slew of bonus material; collaborations with Norman Connors, Pharoah Sanders, McCoy Tyner, Grover Washington Jr, and even Barry Manilow.

Sadly, there are no previously unissued songs and the omission of the 12″ extended version of ‘Ain’t You Had Enough Love’ probably reflects the fact that the master tape is missing but these are minor things that only pedants would fret about. Overall, ‘Old Friend’ with its detailed liner notes, is a box set to savour; a vivid portrait of one of the greatest, most sensitive and soulful, singers that America has ever produced.