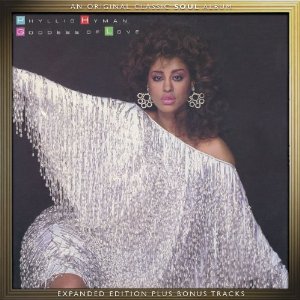 Reissued a few years back by Reel Music (see the review in our archives), Phyllis Hyman’s swansong for Clive Davis’ Arista company, comes to CD again – this time with bonus material. In truth, the statuesque Philly soul siren only recorded her best work after she had left Arista in ’83. Her years at the company were unsatisfactory in terms of the quality of the material she was given – and the inconsistent ‘Goddess Of Love’ is a case in point. Hyman’s sultry, nuanced vocals are on point as always, even on disposable dance fodder such as the energetic opener, ‘Riding The Tiger,’ and the exotic title track (both helmed by Narada Michael Walden, then an up-and-coming producer in the R&B world).

But the real disappointment is the material cut under the auspices of Philly legend, Thom Bell. The ballad ‘Your Move, My Heart,’ is a good one and showcases the dramatic qualities in Hyman’s bruised vocal tones. But that’s as good as it gets. The magic that Bell conjured up for groups like The Spinners and Stylistics is a distant memory. ‘Let Somebody Love You’ has a Latin undertow but is a bit cheesy while the sparse instrumentation of ‘Falling Star’ with its rigid rhythms and cheap-sounding synthesiser sounds comes across like a demo recording. In fact, Bell’s production is arid, flat and stiff and doesn’t enhance his material, as exemplified on the repetitive ‘We Should Be Lovers.’ ‘Just Me And You’ is a pleasant country-tinged ballad but again, the production is fairly dull, plodding and unadventurous though there’s no faulting Hyman’s lush vocals, which are superb throughout.

The album’s best cut, perhaps surprisingly to some perhaps, was produced by Narada Michael Walden – the lovely groove ballad ‘Why Did You Turn Me On.’ Though ‘Goddess Of Love’ is a must-have for dedicated fans of the tragic songstress, the album’s inconsistency epitomises the unevenness of Phyllis Hyman’s Arista output. By the way, appended to the original album are three mixes of ‘Riding The Tiger’ including a nine-minute 12-inch version. If you’re a Hyman completist you’ll need those.