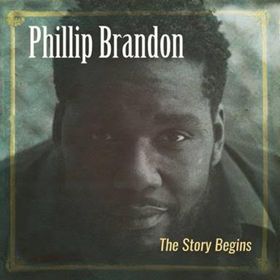 Phillip Brandon is a new-ish kid on the soul block. Raised in LA by music savvy parents (Phillip Sr was a jazz buff while mother Brenda was a member of Ray Charles’ legendary Raelets) young Phil took a degree in marketing before embarking on his music career. Early jobs included working the cruise ships before he became in demand on the musical theatre circuit… most notably working in the BeBe Winans theatrical biog-show. Eventually Phillip landed a job with multi-platinum-selling rock group Trans Siberian Orchestra but in 2013 he struck out on his own with a 5 track EP that hit the smooth jazz charts and won Mr B plenty of live work. Now he’s all set to release this – his first full long player and, with production input from Preston Glass, ‘The Story Begins’ is already winning praise in discerning soul and jazz circles… and it’s easy to hear why. The album is an effortless and intriguing listen from start to finish with Phillip’s approach drawing comparisons to artists like Will Downing and Gregory Porter.

Indeed Porter is a particular hero/role model for Brandon. He says; “Mr. Porter gave me the most current inspiration to do what I do. He once stated that it was his hope that he had opened a door for others to be unique” and on ‘The Story Begins’ you can hear the GP influence straight away on the LP’s title cut – a lazy, melodic, soul-jazz meander where Preston Glass allows Brandon’s plaintive tenor/baritone do the work. The gentler ‘Stay In The Moment’ is another album highlight and as a bonus Phillip coaxed his mother, Brenda, to join him on the song. Their voices meld beautifully on the title hook.

Elsewhere, ‘Looking For You’ channels a Stevie Wonder flavour, while the uplifting ‘Chocolate Child’ references messages voiced by pioneers like Oscar Brown Jr, Donny Hathaway and Curtis Mayfield. Listen up too to the lovely-piano-led ballad that is ‘A Funny Thing Happened On The Way To Goodbye’ and the pitch at the lucrative “Wedding Song” market that is ‘The Promise’ –though I could have done without the rocky guitar towards the end.

The album boasts one focus cover – a version of Luther Vandross’ ‘Wait For Love’. It’s a measure of Brandon’s confidence that he tackles a Vandross number and to be fair he doesn’t stray too far from the original though he does attempt a “jazzier” feel in the vocal and both song and delivery fit perfectly the overall mood of ‘The Story Begins’.

Phillip Brandon sums up his music philosophy thus: “I love the music of yesteryear…when Pop wasn’t a format, just what was legitimately popular. I want to get back to a day when that comes back. In the meantime, I create songs from the heart and a spiritual space of hope.” Judge for yourself if he’s succeeded when ‘The Story Begins’ wins official release on October 20th.