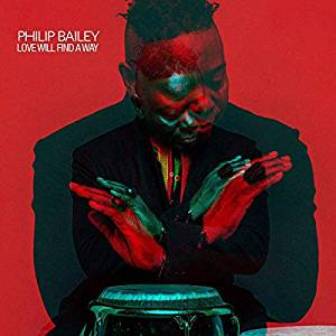 In the soul history books and encyclopaedias, Philip Bailey will be forever known as the singer in Earth Wind and Fire. And rightly so, his distinctive, sometimes fragile falsetto fronted many of EWF’s best tunes. Phil still works with the current line up of the band. He calls that his “day job” but what many casual music lovers don’t realize is that Bailey has also had a long and impressive solo career. Indeed, his Phil Collins- produced ‘Chinese Wall’ was a platinum seller back in 1984. Hard to believe but he has in fact 11 solo collections under his belt – some blending pop/soul like ‘Chinese Wall’, others in the gospel idiom and a handful of jazz sets. Jazz is one of Bailey’s real passions and it was during a jazz concert a year or two back that he had the genesis of an idea to record another jazz-inflected collection and with a few tweaks to the original concept – here it is – a lovely, concise ten tracker, ‘Love Will Find Away’.

The album was heralded by the single ‘Billy Jack’, a West-African-tinged version of the Curtis Mayfield classic. Helmed by Robert Glasper, its “difference” sets the tone for much of the rest of the long player. Another Mayfield song, ‘We’re A Winner’ gets a delicious new subtle treatment. On it Bailey is joined on vocals by Bilal. He takes the Fred Cash and Sam Gooden parts. Wait for the quite beautiful ending. Other album guests/collaborators include new jazz poster boy Kamasi Washington who’s on ‘Sacred Sounds’. It’s has a strong 70s feel to it – an uncredited homage to Pharoah Sanders? For a credited homage however look no further than the LP’s title cut – here Casey Benjamin’s sax takes the Sander’s role. For a vocal album, Bailey is happy to let his sidemen take plenty of the limelight – no more so than on the almost instrumental ‘Stairway To The Stars’… tribal beats by Will I Am and horn parts from Christian Scott a Tunde Adujah.

But let’s remember that the name of this particular marquee is Philip Bailey’s and to hear that beautiful voice at its very best, try the cover of Marvin’s ‘Just To Keep You Satisfied’ or the sweet and lovely version of Chick Corea’s ‘You’re Everything’. That was the track that got the ball rolling for this album and it’s probably the most straightforward cut amongst the ten… like we said Phil changed tack plenty of times during the recording process here.

Find out more about those changes and the whole ethos behind the album by accessing our Philip Bailey interview.