PHIL UPCHURCH AND OTHERS: The Big Hits Dances (Cherry Red) 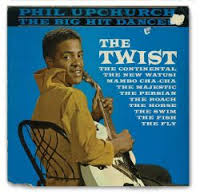 Though legendary Chicago guitarist Phil Upchurch’s name is upfront on this album, the set is actually a various artists compilation – it’s focus being to assemble some 24 tracks that cover the early 60s US obsession with dance crazes. Upchurch gets the main credit ‘cos the set features nine of his tunes. They’re chiefly taken from his 1961 long player ‘The Big Dance Hits’ and include his soulful and jazzy instrumental invitations to do ‘The Hog’, ‘The Cha Cha Blues’, ‘The Fly’, ‘The Majestic’ and ‘The Swim’. His biggest hit, ‘You Can’t Sit Down’, kinda sums up the whole impact of dance mania and here it kicks thing off big style. It’s still a clarion call to get on you feet –no wonder the savvy producers of the groundbreaking ‘Ready Steady Go’ programme choose it as their theme tune.

Other well-known items on the set include Chris Kenner’s raw, original version of ‘Land Of 1,000 Dances’ (interestingly Wilson Picket’s version of the song became another RSG theme), Jimmy McCracklin’s wonderful ‘The Walk’ and Hank Ballard’s daddy of all dance tunes, ‘The Twist’.

As is often the way with compilations like this it’s the lesser known items that bring the real delight. Here enjoy (maybe for the first time) lost gems like Russell Byrd’s ‘Hitchhike’ (not the Marvin Gaye tune), The Rollers’ ‘Continental Walk’, The Diamonds’ ‘The Stroll’ and King Curtis backed by the Noble Knights with ‘Soul Twist’. The set ends with the song that probably ended most 60s record hops and prom nights – ‘Save The Last Dance For Me’. Here we get it in a cover version from The Olympics.

This collection’s a great trip (or should that be twist?) down Memory Lane. It’s a pity that the sleeve notes aren’t more exhaustive and accurate and some archive pictures would have helped…. but that’s the nature of budget reissues, I guess, and at least we have the music.