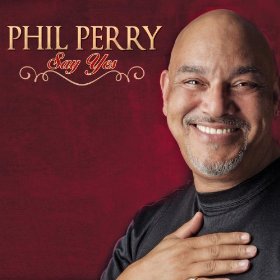 Phil Perry is the undisputed king of smooth soul and for his new album he offers the same kind of fare that earned him that title. The 10 tracker offers his usual mix of originals and well-chosen covers – all delivered in that velvety, smooth, emotive way that’s won people over since his days fronting the Montclairs.

‘Say Yes’ opens with Phil’s version of the Sam Cooke classic ‘You Send Me’ – a song covered that many times that you wonder what Phil can bring to it that’s new. Well, he begins with a short spoken intro – speaking of the importance and influence of the 60s before starting the song in much the expected way; then, though, it all changes gear as Phil’s vocal floats over a subtle, shuffling modern soul beat. Add to that a great sax solo from Marqueal Jordan and you have a wonderful opening cut. The album’s other covers are versions of ‘Where Is The Love’ (on which Perry’s joined by Chanté Moore), ‘The Long And Winding Road’, ‘Bridge Over Troubled Water’ and Michael McDonald’s ‘You Belong To Me’. All are treated with respect – none straying too far from the original intentions.

The new numbers are generally as you’d expect and as if to underline his “smooth” credentials, Phil brings in that other old smoothie, Najee to guest on two cuts. The sax man weaves his way through ‘Tonight Just Me And You’ and ‘Can’t Hide Love’. Best of the original tunes happens to be the most adventurous too – though maybe that’s not quite the right word in the context of a Phil Perry album. ‘Peel The Veil’ has a typical smooth Perry soundscape but the lyric might be seen as controversial – at least in some quarters. It tells the story of a man visiting an “exotic” country and entering a tryst with a “veiled” woman. The clear hint is that it’s a dangerous liaison – underlined by the vaguely Middle Eastern instrumentation; it’s like ‘Nights Over Egypt’ meets ‘Gypsy Woman’… and clearly the most interesting cut amongst the 10.