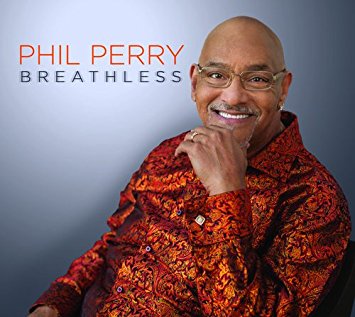 Phil Perry is the consummate smooth soul man. A slew of fine solo albums from the ex Montclairs front man has cemented his position as a major league soul star and this, his 12 solo set, only underlines why artists like the about-to-retire Al Jarreau consider Phil Perry “the real deal”.

Like most of Perry’s long players, ‘Breathless’ is a mix of original songs and well-chosen covers. The two big covers here are versions of Stevie’s ‘Love’s In Need Of Love Today’ and Bacharach and David’s ‘One Less Bell To Answer’. Both are perfectly suited to Phil’s style and approach… quality material for a quality voice. ‘Love’s In Need…’ is treated with the respect it deserves. The piano solo from producer, Chris “Big Dog” Davis is a delight and Perry (naturally) nails the vocal allowing the message to percolate, and boy, if we ever needed to heed that message, we do now. ‘One Less Bell…’ is given a subtle, smooth jazz undertow via Joe Cunningham’s sensual sax while Phil’s effortless, caressed vocal makes a great song greater. It’s the album highlight, though the long player’s title tune, ‘Breathless’, runs it close. Co-written by Davis, it’s the most up-tempo item on offer but, of course, it’s never frantic – just a joyous. optimistic groove and Phil even gets to do a little scatting.

The majority of the other tracks see Phil in more familiar ballad territory. ‘Someday We’ll Meet Again’ is particularly atmospheric; ‘Heaven’s Away’ is deceptively simple but annoyingly catchy; ‘Is It You?’ (a Lee Ritenour song) comes highly recommended too, though the sweet, acoustic guitar passage from guest player, Tony DePaolo is, sadly, just too short. Not a complaint, that, just an observation…. like all of Phil Perry’s work there’s nothing not to like here.