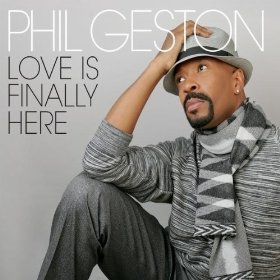 This album has already started to make waves on the underground soul scene and it’s easy to hear why. A glance at our reviews pages (indeed any soul publication’s review section) will reveal that the releases currently winning the plaudits are compilations and reissues of oldies and classics. It seems hard these days to find a modern soul set that has a consistent quality; this one, though, has. ‘Love Is Finally Here’ is set of proper soul songs – beautifully sung and sympathetically produced and though it’s an indie set, it has none of the frustrating drawbacks that are usually associated with the genre.

The reason, I’d suggest, for the album’s excellence lies in Phil Geston’s CV. Born in the Bronx, soul music was an ever-present in the Geston household and it probably won’t surprise you to know that young Phil was a star of both school and church choirs. Indeed his vocal prowess won him a place on a prestigious UK youth choir tour then, on graduating school, he found work on the New York night club circuit and he currently enjoys a semi-residency at Nick Ashford and Valerie Simpson’s famous Sugabar. That really says it all. The club audiences of the Big Apple are notoriously hard to please and if Phil can satisfy Nick and Val too, then that should be enough for us lesser mortals.

Working that kind of circuit has obviously influenced the music Phil makes. He knows audiences want to be entertained – not challenged. They want to relate to their musical past (for the pleasant memories) but they also want to feel that they’re modern and hip enough to enjoy new flavours and on his album Phil manages to do just that. He crafts an accessible sort of soul which, though rooted in the past, has a real modernity about it. Key track, or so it seems to me, is ‘Back To Yesterday’. This is the one that best sums up the points I’m making. It has a great melody – original and refreshing -but the lyrics evoke the good old days and there’s a real warmth surrounding the whole thing. ‘If You Believe In Me’ is another outstanding track. Here the link with the past is established with a Stevie style harmonica (courtesy of Will Galison); lyrically, it’s ambiguous – the “you” we’re asked to “believe” in could be spiritual or secular adding to the intrigue of the album. And it is an intriguing set – for instance the album’s call to party, ‘Goin’ Out Tonight’, is deceptively staid and laid back while the title tune is built around a complex, building structure. It – and the whole album – demand investigation. It’s about time Phil Geston quit the underground for the mainstream. Find out more @ www.myspace.com/philgeston