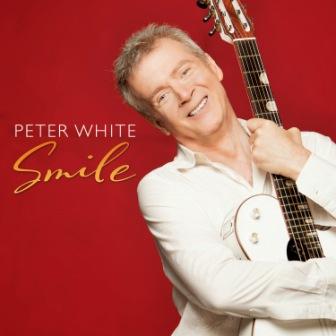 ‘Smile’ is British-born, LA-based guitarist Peter White’s fourteenth album as leader and like all his previous outings this 10 tracker is a pleasing mix of sounds and styles – lite jazz, a hint of classical, a smidgeon of world, a touch of Latin, a dose of Quiet Storm and an undertow of soul.

The most obvious soul groove is ‘Beautiful Love’. This is White’s tribute to Barry White – a singer whom the guitarist has loved since his teens and like most of Barry’s tunes, White’s ‘Beautiful Love’ builds slowly to a sensual climax. The other “tribute tune” on the album is ‘Don Quixote’s Final Quest’. Here the homage is to the Mason Williams’ 60’s guitar hit ‘Classical Gas’ and it couldn’t be more different to the Barry White tune.

In between we have a couple of unchallenging vocals from Mindi Abair who lays down her sax to warble sweetly on ‘Smile’ and ‘Hold Me Close’; some Kenny G style sax from Euge Groove on ‘Coming Home’ and ‘Awakening’; breezy horn work from Rick Braun on ‘Head Over Heels’; and plenty of pleasing key fills from Philippe Saisse.

White himself would be the first to admit that ‘Smile’ wasn’t meant to set the jazz or soul worlds alight. He’s set out to offer a selection of pleasant tunes which “might take you to different places” and his many fans (some who’ve been with him for over 15 years, we’re told) will say he’s succeeded.

If you want to be part of that “success” Peter tours the UK this November, visiting jazz venues mainly in the south, though, brave man, he does venture North for one show… at Altrincham’s lovely Cinnamon Club… an internet search will fill you in with all the details.