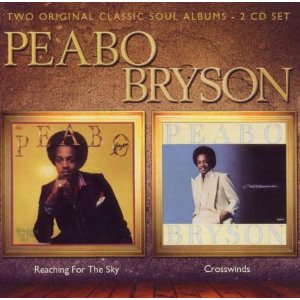 Peabo Bryson was in the vanguard of that very special sweet, soft and sophisticated soul movement that so enchanted in the late 70s and early 80s. Born in Greenville, South Carolina he’d served a musical apprenticeship with people like Michael Zager, even recording a few singles for Bang and Bullet. But in 1978 he signed with Capitol and recorded an album that sort of defined that sweet, soft, sophisticated sound that I’ve just mentioned. The LP, of course, was ‘Reaching For The Sky’ and it’s recently won re-release courtesy of David Nathan’s soulmusic.com label. Though now over 30 years old the music still sounds fresh and vital… age hasn’t withered it one bit. The album’s title track is an accepted soft soul classic – but then so too is the wonderful ‘Feel The Fire’. The good thing, too, is that, back in the day albums weren’t padded out with fillers. Because this was his major label debut, Capitol spared no expense. They ensured that the songs (all Bryson –penned) were top notch and used only the best session players.

Later in ’78 Peabo followed up with ‘Crosswinds’ and that album is also included in this soulmsuic.com package. In many ways, though it lacks a big smash, the 8 tracker was a more coherent effort with Bryson’s superb voice rising above the big arrangements and lush productions. Maybe that’s down to the involvement of the legendary Johnny Pate. The title track (an R&B top 40 hit) is memorable, but this is one of those few oldie LPs that you can safely play from beginning to end without descending to that particularly annoying modern, digital habit of track skipping.

The double CD pack offers both LPs in full – along with a trio of bonuses – edits of some of the singles. Since the 70s Bryson has enjoyed a prolific career (often best-remembered as a duettist) but it’s safe to say he’s never matched the majesty of these first two “proper” LPs.