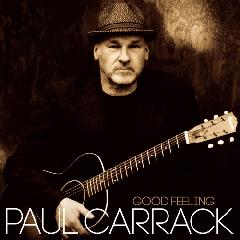 Recorded with a full symphony orchestra, Paul Carrack’s last long player, ‘A Different Hat’, offered his fans something a little different. For this new album (released as usual to tie in with an extensive tour) the Sheffield songster offers what he knows he does best – a set of classy soul-tinged pop recordings delivered in a simple, small combo setting while the songs are his usual mix of self-penned tunes and well-crafted covers. Of those covers the immediate attention grabber is a take on the Drifters’ ‘When My Little Girl Is Smiling’ a tune that harks back to the man’s formative musical years in the Sheffield clubs. Always a good tune (tell me a Goffin/King song that isn’t), Paul treats it with the utmost respect. Gimmick-free and running on a catchy guitar riff, it’s a great setting for Paul’s warm, honest voice and no wonder it’s already become a mainstream radio staple. Other covers on the album include a gruff version of Bruce Springsteen’s ‘If I Should Fall Behind’, a sombre re-visit to Nick Lowe’s ‘From Now On’ and a genuinely moving treatment of jazz man Thad Jones’ ‘A Child Is Born’.

Carrack’s own songs maintain the quality and craftsmanship of the chosen covers with the breezy opener, ‘Good Feelin’ About It’ setting the tone. ‘I Can Hear Ray’ is another album highlight. The song’s theme is homecoming – with the protagonist knowing he’s almost there when he can Ray Charles’ music in the stairwell of where he lives. As outstanding is the broody builder that is ‘I Don’t Wanna Lose Your Love’. It’s built from the same DNA as Carrack’s Ace song ‘How Long’ and it has the potential to be around as long as that classic. The poppy ‘Nothing Without You’ and ‘Time To Move On’, the ballad that is ‘Long Ago’, the country-tinged ‘Make It Right’ and the semi-autobiographical ‘Marmalade Moon’ add real variety to a collection that is as good, fresh and vital as anything Paul Carrack’s recorded before.

Go to our ‘Interview’ section to find out more about Paul Carrack and ‘Good Feeling’.