PAUL CARRACK; Another Side Of… (Carrack UK) 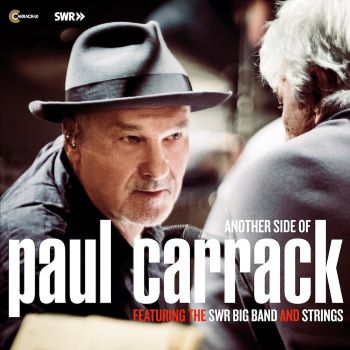 “The hardest working man in show business” is an epithet thrown around all too easily by music writers. They confer the accolade on all kinds of performers… even work-shy fops and those who record and tour all too infrequently! The one UK artist who really does deserve the title is Paul Carrack. He has a remarkable and enviable CV which to even outline here would take far too long and even now, at age 69, he records a new album almost every year and undertakes an extensive annual tour. Add to that TV and radio slots and working on others’ sessions and you can see why Paul really is the “The hardest working man in show business” – certainly in the UK!

The Covid pandemic, of course, has put the skids under everyone’s plans – Paul’s included. His annual tour for instance has been postponed. But Sheffield’s finest hasn’t put his feet up in front of “Homes Under The Hammer”! On the contrary he’s been busy putting the finishing touches to a new album which has just won release. The album is called ‘Another Side Of Paul Carrack’ and it really does show PC in a new, exciting way. The album was recorded for a German TV special with the famed SWR Swing Band and String Section. Now Carrack fans will know that Paul has recorded with big orchestras before – notably 2010’s ‘A Different Hat’ with the Royal Philharmonic Orchestra. But where that was lush and symphonic, this new collection sees Paul move into the big band, swing arena (the clue of course is in the name of the band he’ s working with here!)

The album’s 13 tracks are a mix of Carrack’s own songs and favourites alongside a selection form what is neatly referred to as the Great American Songbook. Fans will remember that on ‘A Different Hat’ he tackled songs from that genre too – notably ‘All The Way’ and ‘For All We Know’ and interestingly he tackles ‘For All We Know’ again on this new set. Amongst the  other standards included on the 13 tracks are ‘At Last’ and an ambitious take on ‘I’ve Got You Under My Skin’ which uses the famous Frank Sinatra/Nelson Riddle arrangement and Paul carries it off with real aplomb!

The Carrack classics given a swing makeover include his Eagles’ song ‘Love Will Keep Us Alive’, the ever wonderful ‘How Long’ and ‘The Living Years’  which is given a rather understated treatment (compared to the rest of the album that is). It really does work – bringing out all the emotion and pathos of this wonderful song. Like the other 12 cuts it really does show another side of Paul Carrack.

The album’s out now but Paul’s still working. On October 15th, he’ll be performing a live set at the Victoria Hall in Leeds which will be available for a live stream. You can check details on Paul’s web site… http://www.paulcarrack.net