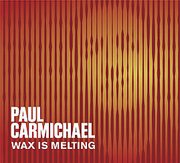 Jazz bassist Paul Carmichael’s musical CV goes back to 1975. His work has been incredibly varied. A mainstay of the London jazz scene, he’s also worked with artists as diverse as Lulu, Charles Azanvour and Manu Dibango. He’s played in the orchestras of countless West End shows and even helped with the music on the toddlers’ TV show ‘Playaway’. Jazz, though, has never been far away and on this new 9 tracker he shows his depth of knowledge of the scene to present a set that’s a varied as contemporary tastes demand.

Proceedings open with a blistering jazz-funk workout, ‘The Destination’. It’s big and brassy with a tremendous alto solo from Nigel Hitchcock. Underpinning it all is the rock steady bass of Carmichael. The mood changes dramatically as the next three tracks offer a suite based on the Icarus legend. The piano-led ‘Contemplation’ – which opens the suite – is particularly strong… the title saying it all. Different again is the Latin romp of ‘Liberatation Salsa’. Hugely percussive, it’s another brass heavy piece held together by the steadiest of bass lines. Carmichael’s bass is more loping on the almost dubby ‘Jazz In The Desert’. It’s a real pot pourri of sounds and features eerie choral vocals from Graciela Rodriguez.

The album also boasts a couple of “proper” vocals and on both ‘Wake Up Spring Is Here’ and ‘Go Go’ label mate, Vanessa Haynes is on tremendous form. The former , which reminds me a little of the best of Carmen Lundy, has a lovely summery feel to it while the latter is a driving soul dancer that includes a French language rap from Svenz which takes it into Guru/MC Solaar territory.

Maybe you can see now what I meant by “varied” at the top. That said, though, ‘Wax Is Melting’ doesn’t sound like a disparate set. It’s given a unity by Carmichael’s strong leadership throughout. His bass lines are clear and strong but they don’t dominate. He leaves plenty of space for his fellow players to shine – notably the aforementioned Hitchcock and piano man Rick Laughlin. You can learn more about this album @ www.changeofweather.com