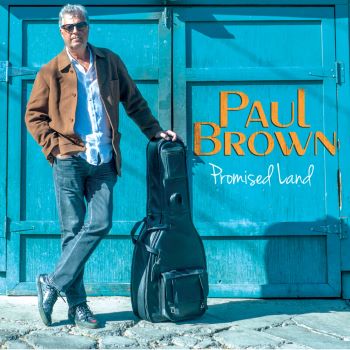 ‘Promised Land’ is jazz guitarist Paul Brown’s 12th album as leader and if you’re a devotee of guitar-led smooth jazz with a soulful undertow, you’ll find much to please on the 10 tracker which is set for release 15th July.

The album opens in fine style with a brash and brassy ‘Secret Sauce’. It’s an immediate grabber enhanced by soulful horn work from Memphis duo Greg Vail and Ron King. The pair play throughout the album perhaps explaining the occasional southern soul flourishes behind Brown’s concise guitar work. That ‘Secret Sauce’ is classic, guitar-fronted smooth jazz. Ditto ‘Don’t Stop’ (featuring Marion Meadows’ sax), ‘7+7’ (with guest sax input from long time Brown collaborator, Euge Groove) and ‘Round And Round’. ‘Yo Tengo’ is the LP’s  Latin moment while ‘Hey Dude’ (which Brown offers as a Beatle homage) is bluesier altogether. The album’s sweet spot is ‘Elegance’ – as smooth and sophisticated  as the title implies.

That just really leaves one sonic cuckoo in the nest – the album’s title track. Brown describes his home town of L.A as a promised  land of musical opportunities  so maybe the Shane Theriot-penned song chimed with the guitarist. It’s a vocal with Paul at the mic and it’s   very different to the other 9 tracks, reminding me of the Eagles’ circa ‘Hotel California’ though it lacks that band’s exquisite harmonies. Paul tells us that his favourite vocalists are Ry Cooder, Bob Dylan and Frank Sinatra – maybe that explains the quirky sound!