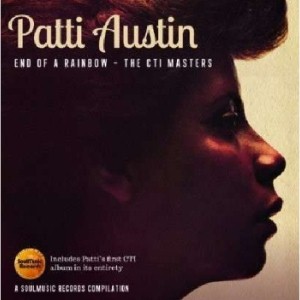 The ever-lovely Patti Austin is a doyenne of the soul and jazz scene. She made her debut way back in 1954, when, aged just four, she wowed the audience of the Harlem Apollo. Her brief appearance at the famed theatre was enough to secure her a deal with RCA Records – a child prodigy indeed. Mind you, with godparents like Quincy Jones and Dinah Washington, the auguries were long in place. By the late 60s Patti was the session singer and jingle/commercial maker of choice on the New York studio scene. At the same time she found time to make her own solo records with labels like ABC, United Artists and Columbia though major chart success just eluded her… maybe she was content enough to be “Queen Of The Jingles”! Then, after organising the backing vocalists for several CTI recordings, label boss, Creed Taylor, signed her up as a performer and the result was the acclaimed 1976 album ‘End Of Rainbow’ which secured a top 40 placing in the Billboard jazz album chart. Pleased with that success, Taylor allowed Patti to cut two more LPs – ’78’s ‘Havana Candy’ and ’80’s ‘Body Language’.

With this new Soul Music Records release, you can enjoy the whole of the ‘Rainbow’ album along with a selection of tracks from the other two CTI sets. The 18 cut compilation shows Patti at the top of her game… a consummate vocalist right at home with soulful dancers like her jazzy cover of, ‘More Today Than Yesterday’, middle of the road ballads like ‘What’s At The End Of The Rainbow’, pleasing pop ditties like Squeeze’s ‘Another Nail For My Heart’, funky rumblers like Isaac Hayes’ ‘Body Language’ and quirky items like ‘Sweet Sadie The Saviour’ (shades of Laura Nyro). Other highlights include ‘Give It Time’, ‘This Side Of Heaven’, ‘We’re In Love’ and the lovely Minnie Riperton-esque ‘Say You Love Me’… oh and if you like sweet, tear-jerkers, try ‘You Don’t Have To Say You’re Sorry’.

After CTI Patti Austin went on to bigger things with her godfather, Quincy Jones, and she continues to make great music today… winning a Grammy in 2007. Now with this new reissue you can catch up on some of the lady’s great back pages.