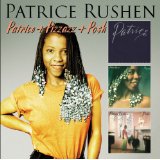 Through a deal with Rhino, the UK’s Edsel label has just reissued all of keyboard/vocalist Patrice Rushen’s Elektra albums. The California musician’s first three albums for the label are sequenced back-to-back on a double disc set while her final two Elektra LPs also receive the ‘twofer’ treatment. Both sets are bolstered with hard-to-find bonus tracks, copious liner notes, and sonically, in terms of their mastering, represent an improvement on previous CD versions.

Patrice Rushen started out as a keyboard prodigy who signed to indie jazz company, Prestige, in 1974 and made largely instrumental albums up until the time that major label Elektra nabbed her signature in 1978. On ‘Patrice,’ however, vocals were the main focus of the album’s music and tracks such as the lovely, delicate ballad, ‘When I Found You” and the funky dance groove, ‘Hang It Up,’ gave Rushen crossover status and commercial viability. ’79’s sophisticated ‘Pizzazz’ featured more of the same and its blend of soulful, introspective ballads with brassy, EW&F-influenced uptempo material showed off Rushen’s versatility. It also included the wonderful ‘Haven’t You Heard,’ a storming dance cut that perfectly balanced Rushen’s R&B and jazz sides. A year later and ‘Posh’ hit the shops – adhering to a similar formula as her previous Elektra albums (slick grooves, jazz-inflected chords and solos, and infectious vocal choruses) it cemented Rushen’s position as talented all-rounder. Appended to Edsel’s new reissue compilation are four additional mixes, including 12-inch ones of ‘Hang It Up,’ ‘Play’ and ‘Look Up.’

But it was 1982’s ‘Straight From The Heart’ that catapulted Rushen into the R&B stratosphere. That was mainly due to the strength and appeal of its opening track and lead off single, ‘Forget Me Nots,’ which was a big hit on both sides of the Atlantic. The song has been much-sampled over the years – by Will Smith and George Michael to name two – and the cut’s catchy hook and monster bass line made it Rushen’s best-selling record. The parent album wasn’t bad, either, and included the lovely groove ballad ‘Remind Me’ – which should have been released as a single – and the punchy jazz-funk instrumental ‘Number One.’

By the time that 1984’s ‘Now’ came along (which is paired with ‘Straight From The Heart’ in this Edsel reissue), technology had taken over soul music and human rhythm sections were replaced by drum machines and MIDI keyboards. Patrice Rushen elected to take this route and although the opener, ‘Feel So Real (Won’t Let Go),’ was a decent tune, overall the album’s sparse electro-grooves lacked the imagination and creativity of Rushen’s previous Elektra releases. The album’s still worth investigating and the fact that nine extended mixes are bolted on to this reissue (including the 12-inch mix of ‘Forget Me Nots’) gives it extra allure in the eyes of collectors.