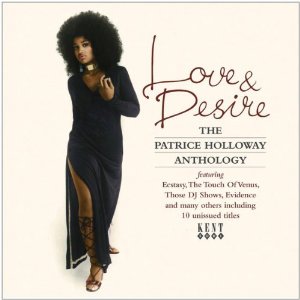 Patrice Holloway was the younger sister of Brenda Holloway and like her big sister she possessed a mighty soul voice – shaped, like Brenda’s, in the neighbourhood churches of Los Angeles. The Holloway sisters entered show business at an early age, with Patrice making her recording debut in 1963, aged just 12 and Brenda signing for Motown not too long after. Patrice soon followed her into the burgeoning Gordy empire but though she recorded regularly she never matched her big sister’s success. Patrice left Motown in ’65 and went into session work (mainly with the Mirwood label), then, in 1966 she signed a solo deal with Capitol… even though she was still only 15! She recorded a number of sides with Gene and Billy Page, David Axelrod and Willie Hutch – but chart success still eluded her and she went back to session work. Amongst her work at that time was supplying the soulful backups on Joe Cocker’s ‘With A Little Help From My Friends’ and being a Supreme behind Diana Ross’s ‘Someday We’ll Be Together’. Later she supplied a voice to ‘Josie and The Pussycats’ – a Hanna-Barbera cartoon built around the adventures of a female singing trio; then in ’69 she re-signed to Capitol. Sadly, her second stay at the label was as fruitless as the first and by 1972 she was back to high profile session work.

Tragically, in early twenties, Patrice Holloway succumbed to a mental illness and retired from singing. She was just 23. Diagnosed with severe schizophrenia, she and her family were left musing about what might have been. Patrice eventually died in 2006 –aged 55. Brenda Holloway summed up her sister’s talent, “She was a phenomenal singer. She just had that gift”.

Now thanks to Ace/Kent, we all can enjoy that gift, as here they’ve assembled all of Patrice’s Motown and Capitol recordings in this much-needed anthology. The first nine tracks are the songs she recorded at Capitol and include a wonderfully bright and typical Billy and Gene Page production, ‘Lucky My Boy’. The rest of the album focuses on Patrice’s stint at Motown and label buffs will already be familiar with her wonderful version of ‘The Touch Of Venus’ and 1965’s ‘For The Love Of Mike’, which is an absolute synthesis of all that was great about Motown in that year. Then there’s her 1963 ode to “Little” Stevie Wonder, ‘Stevie’… she was his girlfriend at the time. To top it all the CD contains ten previously unreleased items including a swinging version of Smokey’s ‘All That’s Good’. Some of the material (like ‘Face In The Crowd’) has a distinct non-Motown flavour but the consistency comes with Patrice’s soulful delivery. As with all Kent material, the accompanying booklet contains everything you’ll ever need to know about Patrice Holloway. There’s also a generous selection of archive photos and glowing tributes from a whole host of fellow artists… who all attest to the craft and talent of a long-neglected true soul stylist.