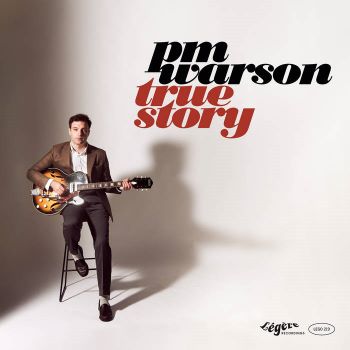 London-based singer/songwriter P M Warson is a new kid on the blue-eyed soul block. He’s a self-confessed “Modernist” – that’s a mod to you and me. He’s steeped himself in 60s culture citing The Impressions’ ‘Keep On Pushing’ and the Isley Brothers’ original 1964 recoding of ‘That Lady’ as two of his favourite records while amongst his favoured artists are Ray Charles, Junior Wells and Magic Sam. Mr W has clearly got a lot going for him, especially as tastemaker Craig Charles is already championing his music. What’s more one of his early singles, ‘(Don’t) Hold Me Down’ has won loads of support on the mod/Northern soul scenes. Warson self-published the song as 7” and it was quickly embraced by the Fred Perry brand to use on their ‘Soul Boy’ promotional video.

‘(Don’t) Hold Me Down’ is one of many highlights on Warson’s debut album, ‘True Story, which is set for release on April 23rd. It opens the album’s second side (the CD is sequenced like a 12” album and I’m sure there’s a vinyl iteration out there too) and you can hear why the Northern crowd/Fred Perry crew  embraced it. It’s one of those few modern recordings that captures the essence of Northern soul – crisp beats, a catchy song, soulful delivery, a honking sax/horn solo and authentic femme backing vocals. And the concise 10 tracker offers plenty more of the same. First there’s ‘You Gotta Tell Me’ and, even better, a cover of Ashford and Simpson’s ‘I Don’t Need No Doctor’. That one was originally recorded by Nickolas Ashford but turned into a US hit by Ray Charles. The LP’s other cover is a take on Bob Dylan’s ‘To Be Alone With You’ which Warson delivers in jaunty, call and response fashion. The song first appeared on Dylan’s 1966 album, ‘Nashville Skyline’. The same year that Ray Charles issued his ‘I Don’t Need No Doctor’, so you can clearly see where Mr W is coming from.

His sources are clearly evident right from the start. The opening cut ‘Losing And Winning’ is a hybrid of Willie John’s ‘Fever’ and Jimmy McCracklin’s ‘The Walk’. Then there’s the Hammond-fuelled ‘Seen You Around’ – shades  of early Georgie Fame via Booker T. The album’s down-tempo moments include ‘Say The Word’, ‘True Story’ and ‘Just Call My Name’ and all are built for the same rootsy, organic elements that fire up the album’s faster moments. However, be certain that ‘True Story’ isn’t just an exercise in nostalgia. Like James Hunter, Warson has taken the music he loves; the music that moves him and given it a contemporary slant. He’s embraced the old but fused it with his own indie/new wave sensitivities… an auspicious debut!