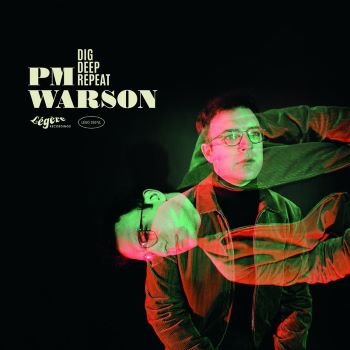 P M WARSON is a London-based singer/songwriter who cites The Impressions’ ‘Keep On Pushing’ and the Isley Brothers’ original 1964 recording of ‘That Lady’ as two of his favourite records! Little wonder that we’ve been tracking his musical odyssey for the past couple of years. His most recent single backed up what we knew of him and where he was coming from. It was a cover of Eddie Holland’s 1963  ‘Leaving Here’. Mr W made a great fist of it … girl group bvs, punchy brass, swirling organ, convincing vocals and to add something a little different, some garage rock guitar parts!

We were told that this new ‘Leaving Here’ heralded an upcoming album from P M and said LP (a concise 9 tracker) has just been released. The cover of ‘Leaving Here’ has lost none of its analogue attraction and as a sort of added bonus the album boasts a “part 2” of the song. Plenty of 60s singles came in two parts (don’t think Eddie H’s did though), so once again Mr Warson  is doffing his cap to the era he loves by giving us a second take on the Motown chestnut. This “part 2”, quite rightly, is different to “part 1” (which was the single). It’s slower, there’s a jazzy undertow, it clocks in at two minutes  longer and offers a whole new perspective.

The remaining 7 tracks on the album are all Warson originals and though they offer a contemporary sound their roots are firmly in the 60s – remember, our man is a  self-confessed “Modernist” – (a mod to you and me) steeped  in 60s culture. Try ‘Never In Doubt’ to hear what I mean. It’s hard to pin down but the riff is classic 60s – maybe ‘Green Onions’… maybe something else! Then there’s ‘Nowhere To Go’ with an intro that’s almost ‘Stand By Me’ but it isn’t. And that’s what you’ll be doing  throughout this album – hearing something vaguely familiar before it ghosts away.

The album’s focus cut (I’m guessing)  is ‘Dig Deep’ for which the album is named (again I’m guessing). This is actually a surging instrumental that reminds me (I’m of that age!) of 60s US instrumental combo, the Ventures. Again, you see, our friend Warson has done his 60s homework!

Warson’s a busy man. We enjoyed his 2021 LP, ‘True Story’ and with this new one, that story continues. In places the music reminds me of James Hunter. They both take the music they love and give it a contemporary slant… the  old but fused with indie/new wave sensitivities.