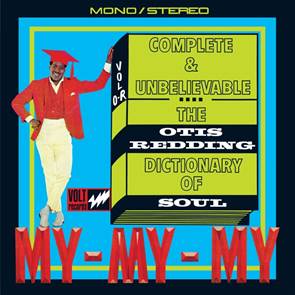 This is the fiftieth anniversary issue of one of soul music’s most revered and beloved albums. It was first released in late 1966 on Memphis’ mighty Stax label (on their Volt subsidiary) and on this freshly-minted 2-CD edition you get both the mono and stereo configurations of the original LP plus sundry bonus tracks. It wasn’t Otis’ best-selling album – unsurprisingly, the posthumous ‘Dock Of The Bay,’ released in the wake of the singer’s tragic death, eclipsed it in terms of sales – but it’s rightly regarded as one of the cornerstones of Otis Redding’s musical legacy. In terms of his recorded output, it was his fifth LP and also, more significantly, the final solo long player he released before perishing when his plane went down into the frozen waters of Lake Monona in Madison, Wisconsin, on December 10th 1967.

‘Dictionary…’ yielded a couple of substantial US R&B hits – ‘Fa-Fa-Fa-Fa-Fa (Sad Song)’ and ‘Try A Little Tenderness’ – but unlike many soul and R&B albums of the day, it wasn’t just a hodgepodge of hits and filler. It was totally and utterly convincing as a cohesive piece of art. No song is perfunctory or just there to make up the numbers and every song is an essential piece of a jigsaw that tells a story. In essence, it’s a song cycle reflecting on the vicissitudes of love and romance, and its concomitant  joys and pain. Through his cathartic performances, Otis taps into a vast reservoir of bubbling emotion, which on the brilliant ‘Try A Little Tenderness’ is unleashed like an all-engulfing tsunami. Fifty years on, it’s still incredibly powerful and among the bonus tracks is an incendiary live version from the Stax/Volt revue captured live in Europe during ’67 that takes the song to new levels of intensity.

Other highlights include a stomping, soul-infused take on the Beatles’ ‘Day Tripper’ (there’s also a live bonus version included in this package), ‘She Put The Hurt On Me’ and the equally dynamic, horn laden, ‘Sweet Lorene.’ Those three are uptempo songs but, of course, nobody could deliver a ballad like Otis, and his performances on ‘My Lover’s Prayer,’ ‘Tennessee Waltz,’ ‘You’re Still My Baby’ and ‘Ton Of Joy’ are replete with a robust sensuality combined with tenderness and a nuanced sensitivity that few singers can match. Aside from three live versions of songs from the album, the bonus material includes studio outtakes (‘Trick Or Treat’ and ‘Loving By The Pound’) and a non-album B-side (‘Don’t Mess With Cupid’). Whether your preference is for the mono or stereo versions (or the CD or vinyl version), the fact is that the music sounds superb in whatever format it’s rendered. It might be fifty years old now but it hasn’t aged a jot and is as fresh and vital as the day it was recorded. If you’re a soul music fan and don’t own this, now’s the time to add it to your collection. You won’t regret it.