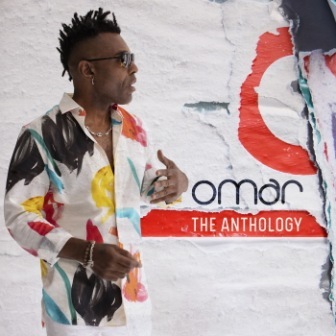 Omar (or to be precise, Omar Lyefook MBE) is a unique British soul talent. He’s one of those very rare UK artists with an immediately recognizable voice and style. And if you dare to doubt that, may we point you to an upcoming retrospective of the man’s best work on Freestyle Records. ‘The Anthology’ offers a massive 32 track sweep and from the opening, ‘Pass It On’ (a collaboration with Terri Walker) through to the closing, quirky, waltz that is ‘Deja Vu’ there’s no let up in panache, quality and soulfulness. Little wonder, that a certain Stevie Wonder numbers Mr F amongst his favourite singers and as we know Stevie put his money where his mouth is by collaborating with Omar on ‘Feeling You’.

That track is one of many big name collaborations that Omar has worked on and is included here. Here you can also enjoy his collaborations with people like Carleen Anderson, Caron Wheeler, Kele LeRoc, Leon Ware, the Floacist Robert Glasper and of course Erykah Badu. The big Badu/Omar pairing is, of course, their version of ‘Be Thankful’. The measure of the cut’s class is the fact that though William DeVaughn’s original is just that – the original, the Omar/Badu version is acknowledged as equally excellent and stands proud in its own right… not really seen as a cover at all. It’s one of this collection’s big highlights – a benchmark. The other clear highlight is, of course, the one that started it all off… ‘There’s Nothing Like This’. It still sounds vital and fresh and, you know, the word “classic” is overused in the music press, but ‘There’s Nothing Like This’ is just that – a classic.

This collection’s big sales pitch is that there are two previously unreleased tracks … the Terri Walker duet ‘Pass It On’ and ‘Long Time Coming’. I’m not entirely sure about the latter but the former, in fact, has been out before… last September, I think. It doesn’t really matter, I suppose, still a great tune!

Sadly no space here for the Angie Stone mixes of ‘Be Thankful’ or the 2013 re-recording of ‘There’s Nothing Like This’ but that’s more than made up for by the sheer quality of everything else!