OMAR: Sing (If You Want It) (Tru Thoughts) 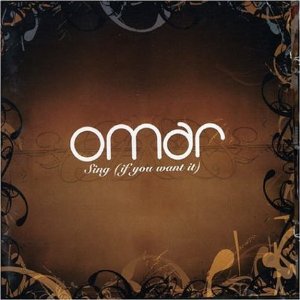 Omar first broke through in 1992 with the still-lovely ‘There’s Nothing Like This’ and though it’s estimated that since then he’s sold over half a million records he’s still not the household name soul music biz insiders know he should be. It’s acknowledged that his career’s been dogged by bad luck – the worst example being the collapse of his record label just after the release of his 2005 album ‘Sing (If You Want It)’. The LP not only featured big name collaborations (Stevie Wonder, Angie Stone, Estelle and Common) but it was also stuffed with catchy, radio-friendly songs that could have provided the big breakthrough.

If you missed that album first time around, you can catch up with it right now as Tru Thoughts have just had the foresight to re-release it and though it’s 6 years old the music still sounds fresh and contemporary. Witness the album’s title cut. ‘Sing’ features all the elements that have won Omar so many past accolades and vocally he’s never sounded better. That one’s followed by the equally excellent ‘Be A Man’ (featuring J C Bentley). This one (you may remember) has a great Latin undercurrent and a touch of Stevie Wonder about its construction and instrumentation… and speaking of Mr. W his contribution – the duet that is ‘Feeling You’ is another of the album’s high spots. It’s a busy little tune with an incredibly catchy hook. The two other big collaborative efforts are the songs that feature Angie Stone – ‘All For Me’ and ‘Stylin”. ‘All For Me’ is a ponderous ballad while ‘Stylin” rides a tight, modern soul groove … really infectious. Elsewhere ‘Your Mess’ is a light Latin confection while ‘It’s So’ is a big samba school workout.

I guess soul collectors remember all this from the first time around but as a bonus Tru Thoughts have added two extra cuts. One is Omar’s new single, ‘Dancing’. Featuring Zed Bias, it’s already big in discerning clubs and on taste-making radio stations. Then there’s an exclusive Bob Sinclar mix of ‘It’s So’ .The Frenchman retains the Samba style percussion but boosts things with a bouncy bass line that will inspire dancers everywhere. Hopefully Tru Thoughts will last long enough to see ‘Sing (If You Want It)’ win the plaudits and sales it deserves.