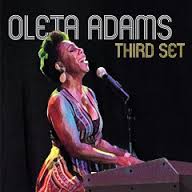 It’s been a while since we’ve heard anything new from the lovely Oleta Adams. Now fresh from enjoying her duet with Jose James on his latest long player, we’re treated to a whole new album from the Kansas singer/songwriter… her ninth solo set and her first for 8 years.

Oleta’s people tell us that she’s been making her very special music for an amazing 45 years and the title of this new collection harks back to her very early days. Long before Ms A was “discovered” by Tears For Fears, she earned her living by playing bars and jazz lounges right across the states. The gigs would involve at least three sets across the evening and for the third set, usually very late on when the customers were few and not too attentive, Oleta could indulge herself a little, playing what she wanted to play and trying out new, creative arrangements on her favourite songs.

So here, on ‘Third Set’, Oleta offers imaginative readings of material as diverse as Sinatra’s ‘Only The Lonely’ and Dylan’s ‘Blowing In The Wind’. As befits a live “third set”, the treatments are intimate and hugely personal, totally different to the familiar versions. Of the covers, perhaps the most soul-stirring (and certainly the one getting the air play) is Oleta’s reimagining of Joni Mitchell’s ‘Don’t Interrupt The Sorrow’. Mitchell fans will also enjoy a cover of ‘River’. Joni Mitchell, clearly a heroine of Ms Adams, as is Nina Simone and Oleta pays homage via a reading of her bluesy, sombre ‘Do I Move You’.

The album also boasts four of her own songs, but two are re-workings of a pair of her best… ‘Evolution’ and ‘Rhythm Of Life’. Both are given acoustic, “third set” stylings. The two new songs are ‘Wilted Roses’ and ‘His Loving Eyes’ and stylistically they perfectly fit the mood and sentiment of the collection. The set’s unity is further enhanced by the use of the same three piece band (James Harrah, guitar; John Pena, bass; John Cushon, drums) throughout, but the real unifying factor is Ms Adams’ still distinctive, blues-tinged, world weary voice which has lost none of the passion or soul that we enjoyed in the days of ‘Get Here’.