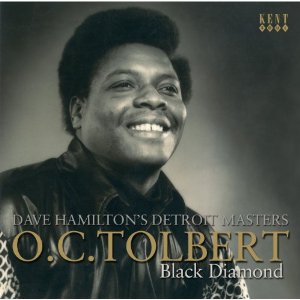 O. C. Tolbert was born Arthur Cleveland Tolbert in Selma, Alabama in 1944. His father was an itinerant preacher – so young Arthur soon found himself singing at his father’s services. He eventually learned piano and started to put together his own gospel choirs as well as being a member of the respected Tolbert Family Singers. In his early twenties he started to sing secular music too – as part of Gene and the Beginners… Gene being his brother-in-law. In 1968 Tolbert relocated to Detroit where the house he lived in backed on to Dave Hamilton’s studios and in 1969 O. C. signed a deal with Hamilton. Between them they cut numerous songs under a variety of names and a number gained release (chiefly on the Rolyak/Rolyat, Power House and New Day labels) but few had any success. A few years back Ace Records were granted access to Dave Hamilton’s archive and here (via their Kent subsidiary) they present a 22 track snap shot of O. C. Tolbert and – sadly –it’s easy to hear why the pair’s efforts were ultimately unsuccessful.

Tolbert, you see, was an intense, broody vocalist steeped in Southern gospel sensitivities and his style is often at odds with the material and productions he was offered and where the material suited, maybe the heavy messages were at odds with what contemporary Detroit wanted –at least in the 60s. Material he recorded with Hamilton in the 80s is more suited to his style and the mood of the times. A good example is ’88’s ‘Ride The Gospel Train’ which is credited to The Tolbert Family Singers featuring Brother O. C Tolbert.

Despite the limitations, there’s enough here to satisfy all sorts of soul collectors – Detroit specialists, Southern buffs and Gospel followers. Of particular note is the breezy ‘You Gotta Hold On Me’ – a lovely, light item with a catchy hook in the chorus and great Detroit production, while ‘Somebody Here With Me’ is a powerfully searing Gospel ballad. Like many lower league soul singers, Tolbert’s career (and indeed life) was complicated and full of intrigue and contradiction. The ultra thorough sleeve notes will guide you through all his ups and downs and the music will allow you to ponder what might have been.