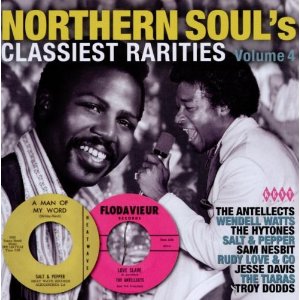 There can be no musical genre stranger than Northern Soul and few labels have served its followers better than the Ace imprint, Kent. This, their new 24 tracker, sums up what Northern Soul is all about and in that summation endorses the strangeness that we’ve just mentioned. First up everything here is “rare” – and rarity has always been a big bonus for any sound hoping to make it on the scene; then, to give lie to the critics who say that all “Northern” sounds the same, there’s a huge variety of music here and what’s more each and every track has some kind of back story to appeal to the anorak – and, let’s face it, there’s no bigger anorak than a Northern one! Listening to this album won’t help you understand Northern Soul any better, but it will entertain you with plenty of gimmick-free, totally enjoyable, real soul music – and in essence that the secret.

“Northern”, I’d say, is all about unpretentious enjoyment and there’s plenty here to enjoy. I was immediately drawn to Jess James’ ‘Are You Going To Leave Me’ – maybe because it sounds an awful lot like the Impressions’ ‘I’m The One Who Loves You’ – but, like its forebear, it’s a delicious mid-tempo swayer. As easy-going are ‘You Don’t Even Know My Name’ from the Hytones, ‘A Dream’ from the Creations and ‘Deeper’ from the Cheques. Don’t worry though, there’s plenty of the classic fast and furious too – the Antellects with ‘Love Slave’ and Darrow Fletcher’s ‘What Good Am I Without You’ for starters. Of course, there are ballads too – all decent nighters finished with one…. and here we get a fabulous ‘Just A Fool’ from Jerry Ganey. Not surprising that it sounds a lot like the Righteous Brothers – it was written and produced by Bill Medley! Then those back stories; Salt and Pepper’s ‘A Man Of My Word’ was cut in Bangkok – yes Thailand! More interesting , I think, is the tale of Priscilla Kennedy. She had no luck working with the Fantasions, the Pearlettes , the Four Js and a number of other groups… so she changed her name to Eleanor Rigby (honest!) and cut a lovely funk tinged stomper called ‘Queen of Losers’ (included here). The follow up, by the way, was called ‘Father McKenzie’… no, not kidding!!! Really, you couldn’t make it up … see what I mean about the strange world of Northern soul – strange, sure, but hugely appealing and addictive.