NORMAN CONNORS: ‘You Are My Starship’ and ‘Romantic Journey’ (Soul Brother) 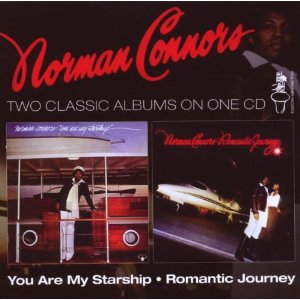 Jazz drummer turned producer and talent spotter, Norman Connors, scored his biggest Stateside chart smash with the cosmic ballad ‘You Are My Starship’ for Buddah Records in 1976. The title cut of his fifth album for Buddah, it rose to #4 in the US R&B charts and featured the virile vocals of Michael Henderson, whose singing ability had previously been overshadowed by his renown as a bass guitar player (he’d played with Miles Davis for five years). Connors’ ‘You Are My Starship‘ album has just been reissued by the Soul Brother label in a fabulous 2-on-1 set with 1977’s ‘Romantic Journey.’

Perhaps the most remarkable thing about Connors’ ‘You Are My Starship’ wasn’t the fact that it produced a big hit single but rather that it introduced the world to a prodigiously talented female singer from Philadelphia. Her name? Phyllis Hyman, of course. Hyman, in fact, steals the show with a marvellously dreamy take on the Stylistics’ Bell/Creed–penned ‘Betcha By Golly Wow,’ her rich, sensuous vocal accompanied by some stellar sax by Gary Bartz. Hyman also duets with Henderson on ‘We Both Need Each Other’ and showcases the jazzier side of her chops with the Latinate scat-sung ‘Just Imagine.’ The album also includes some notable jazz-tinged instrumentals, including a superb take on Pharoah Sanders’ ‘The Creator Has A Master Plan.’

Connors’ follow-up, 1977’s ‘Romantic Journey’ also functioned as a showcase for new soul talent – this time, singers Prince Phillip Mitchell and Eleanore Mills. Mitchell excels on the scintillating ‘Once I’ve Been There,’ a propulsive slice of self-penned symphonic funk. He also appears on the astral ballad, ‘Destination Moon’ – a blatant attempt to capitalise on the space theme of the previous year’s ‘You Are My Starship’ – and duets with Mills on ‘For You Everything.’ As for Mills, she also showcases her vocals on the set’s opener, a cover of The Stylistics’ ‘You Are Everything.’ There’s also another Pharoah Sanders’ cover, this time the instrumental ‘Thembi.’ To add to the set’s sense of variety, the title cut is a blistering piece of jazz rock that spotlights Connors’ prowess on the drum kit and there’s also a funked-up take on Gato Barbieri’s slinky film soundtrack opus, ‘Last Tango In Paris.’ A great ‘twofer’ this, then – for more info click on the Soul Brother link at the bottom of the page.