NORMAN BROWN; Let’s Get Away (Shanachie) 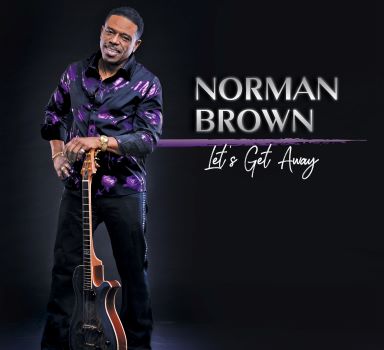 ‘Let’s Get Away’ is garlanded smooth jazz guitarist, Norman Brown’s 13th album as leader. The ten tracker offers classic guitar-led smooth jazz that will delight his legion of fans who are affectionately known as “Normantics”. Non-believers will find much to enjoy too particularly if they’re looking for some uncomplicated music to soothe, to chill out to or simply to take them somewhere away from the myriad problems that we’re facing if even just for an hour or so. Moreover, contemporary soul fans will  discover one real gem – but more of that later.

‘Let’s Get Away’ opens with a gentle, relaxed ‘Back At Ya’ and the album offers plenty more of the same like ‘Late Night Drive’ and the undemanding closer ‘Sunset On Chandler’ – shades of those classic 70s/80s TV themes like ‘Hill Street Blues’ . ‘Easy Livin’’ and ‘L A Chill’ are both brighter and brisker and are excellent aural examples of classic guitar-led smooth jazz – easy on the ear with a soulful undertow. That first one might just remind you a little of the joyous ‘Grazing In The Grass’. For something a little tougher here, try ‘Talk It Out’.

One of the album’s focus cuts is ‘Wes Side Story’ which, as the title suggests, is Brown’s tribute to Wes Montgomery – the father of accessible jazz guitar. It’s a gentle paean to “the man with the Golden Thumb”. There’s a second tribute to Mongomery on the album’s only cover – a version of the Lalo Schifrin tune ‘Down Here On The Ground’ (anoraks will know it as the main theme from the movie ‘Cool Hand Luke’.) In 1968 it was the title track on an #1 Billboard jazz album by Wes Montgomery and were told that Norman’s father, Roy, used the recording to inspire his young son. Here that son (now a lot older) delivers it beautifully!

‘Let’s Get Away’ also offers two vocals – though  the first, the LP’s title song, is best described as a “semi vocal” with multi-instrumentalist Wirlie Morris offering  wispy exhortations around the song title. The album’s bigger vocal is the lovely contemporary soul groove, ‘I Won’t Hurt You’. At the mic on this one is James Champion. I know many within the modern soul brigade often scour smooth jazz albums for hidden treasures – well, here’s a good ‘un for ‘em.

Norman’s people tell us that our man’s a  dedicated meditation and Tai Chi practitioner and he sees his music as an extension of those philosophies. We’re told that  those philosophies “focus on peace, harmonious unification, wisdom, spirit power,  order and truth, balance, justice, free will, creativity, thoughts and morality, manifestation and devotion for divine  earthly living” and that this album “is Brown’s own take on what the perfect getaway involves conjuring serenity, joy and beauty”. Well, you can make up your own minds about that, but I just need to restate that ‘Let’s Get Away’ is a damn fine, guitar-led smooth jazz album and it’s out now via Shanachie!