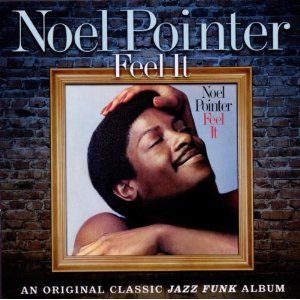 It’s not often a classically-trained violinist experiences a chart entry in the US R&B charts, but back in 1979, 24-year-old Brooklyn fiddler Noel Pointer scored an unlikely hit with an edited-down version of his self-penned song, ‘For You (Disco Concerto).’ It was taken from ‘Feel It,’ his third long player for the now defunct United Artists label and which now makes its CD debut via David Nathan’s Soulmusic.com label. Violinists in the jazz world are a rare commodity (Stuff Smith, Stéphane Grappelli and more recently, Regina Carter spring to mind), but at the end of the ’70s former child prodigy Pointer – who made his concert debut at the age of 13 playing with The Symphony Of The New World orchestra – had already notched up a couple of awards for his earlier albums by the time 1979 came around. On ‘Feel It,’ Pointer demonstrated that he had added another string to his bow by producing his own record and writing much of the material (previously he had worked with producers Larry Rosen and Dave Grusin). It’s an impressive set, fusing soul, jazz, disco, funk and classical music into an intriguing brew.

The opener, ‘Captain Jarvis,’ opens with a slapped bass groove, jazzy Fender Rhodes chords and dancing orchestral strings, before Pointer comes in with his violin. Stylistically, it’s reminiscent of what Bob James was doing in the ’70s; classy, mellow-vibed, expertly arranged (by Motown veteran, Paul Riser) and easy on the ear. It also features crack New York session cats such as bassist Will Lee, guitarist Hiram Bullock, and pianist Richard Tee. Three tracks also feature the fabulous Jones Girls on background vocals – the pulsing, disco-inflected title track, the lyrical ballad ‘There’s A Feeling (When You Touch Me)’ (featuring a plaintive lead vocal from Pointer, who discards his violin for the piano) and ‘For You (A Disco Concerto).’ The latter track is arguably the best cut on the set, propelled by a thumping, four-on-the-floor, mirror ball beat and featuring an aching melody from Pointer’s violin.

The violinist’s next United Artists album, 1980’s ‘Calling,’ also comes to CD for the first time. It’s more adventurous and ambitious, perhaps, than ‘Feel It’ (it’s co-produced with Richard Evans) but is also less convincing and maybe that’s why is wasn’t as commercially successful as the violinist’s previous opus – that’s largely because Pointer’s violin takes a back seat to his vocals, which to this writer’s ear at least, are patently not his strongest asset. The set kicks off with ‘As Long As I Know,’ a mid-tempo romantic duet featuring former Supreme, Sherrie Payne. To these ears, Pointer doesn’t seem a natural singer and his vocals sometimes sound forced and awkward, especially on the mid-paced ‘Love Is,’ and the sugary, schmaltzy ballads ‘Higher Than Heaven’ and ‘Peace On Earth.’ The disco-fuelled ‘Precious Pearl’ is a stylistic oddity; its strange, histrionic, vocal melody sounding like it’s been lifted from a heavy metal song that’s been reworked for the Broadway stage. Pointer’s vocals are better on the disco stomper, ‘I Don’t Care,’ but ironically, one of the best cuts is the funk-infused instrumental, ”Tween The Lines,’ where Pointer’s violin work impressively takes centre stage. ‘Calling,’ then, is not one of Noel Pointer’s most satisfying albums though the earlier and much funkier ‘Feel It’ is certainly worth checking out and exploring.