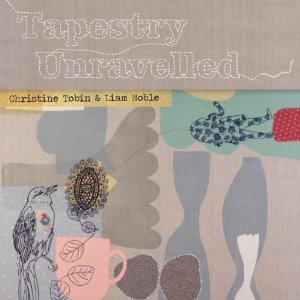 Vocalist Christine Tobin and pianist Liam Noble are two stars of the British jazz circuit… both known for a quiet creativity, especially in dealing with other people’s material. Noble is a celebrated re-inventor (witness his tribute to Dave Brubeck) while Tobin too has won acclaim for her readings of songs by writers like Leonard Cohen. Here the duo take on an ambitious project – their reading of Carole King’s classic 1971 album ‘Tapestry’. It would be easy to ask why bother, but for Tobin the recording was part of a cathartic process. Last year her elder sister, Deidre, died and when the pair were younger the songs of ‘Tapestry’ were an integral part of their growing up together ; to Christine, the songs represent the warm memory of her sister and after singing King’s ‘Beautiful’ at Deidre’s funeral, it became logical to make a recording of the whole ‘Tapestry’ album. Liam Noble joined the project and the result is a stark – sometimes painful work. The arrangements are unvarnished – simple even, but that only serves to bring out the poetic beauty of both the melodies and the lyrics. Noble’s piano is sombre and introspective while Tobin’s vocals –though strong – are soulful and sincere. ‘So Far Away’ is particularly poignant, while ‘Beautiful’ and ‘Tapestry’ itself are totally revitalised. The album is made up of the original eleven songs from ‘Tapestry ‘along with a Tobin original, ‘Closing Time’ which fits the overall mood perfectly. We have no idea what Carole King thinks about this album, but I’m confident (and I think Christine Tobin would be too) that she’d be delighted.