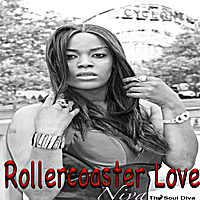 Niva is a young soul wannabee who works in and around Brooklyn and ‘Rollercoaster Love’ is her debut album. In truth, though the set suffers from some of the problems caused by the budgetary restraints that indie artists endure, the album is a decent little collection and the lady certainly shows promise with an unusual and, in places, idiosyncratic delivery. Hear it to best effect on the gentle, swaying title cut; there’s an insinuating groove about it which is continued on ‘Make This Official’, though here the backing track is a tad too sparse. In places Niva and her people make a play for the R&B/pop market –most notably on ‘Eye-Candy’ which was clearly inspired by Beyonce’s ‘Single Ladies’. Niva’s vocal has more of the hard-edged delivery of Beyonce on the album’s most original cut – the big, breezy ‘I Can Love You Better’. It’s very catchy. Partly spoken in French, no punches are pulled and there’s a definite erotic charge to it, especially when Niva recommends that you don’t just look at the menu but get stuck in and lick your fingers clean!. Elsewhere, ‘Pretty Butterfly’ is a dramatic ballad featuring some pleasing acoustic guitar while the electronic ‘What Have You Done To Me’ almost gets into house territory. The best soul cut though comes right at the end. ‘I Will Make it ‘ features an uncredited gentleman who offers some semi-spoken optimism, but Niva’s vocal proves the perfect foil and it’s a great ending to a pleasing debut album.