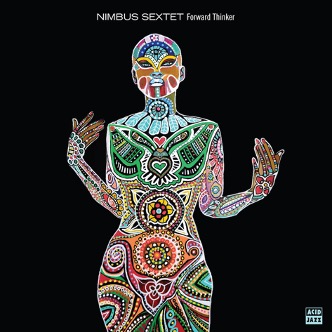 This is the second album on Acid Jazz from Nimbus Sextet, the hotly tipped Glaswegian group led by keyboardist Joe Nicholls. It’s the follow-up to their 2020 debut, ‘Dreams Received,’ a tasty jazz-funk platter helmed by Nuovi Fratelli, a production company comprised of Wayne A. Dickson and Luigi Pasquini, who return to the tiller for ‘Forward Thinker.’

The new album adheres to the retro-tinged brass-heavy blueprint of their debut, though shows the band evolving musically and also features an array of guest contributors, including singer Charlotte de Graaf, trombonist Nathaniel Cross, and the veteran Los Angeles percussion maestro, Steve Forman.

There are shades of Incognito in ‘Forward Thinker,’ an extended, episodic instrumental peppered with taut syncopations where jostling horns ride on a supple bass-driven Brazilian groove.

A seismic chord opens ‘Search For Solace,’ a meditation on the emotional toll of the pandemic, whose questing intro has hints of Wayne Shorter’s work but which then morphs into a smooth jazz-funk groove with harmonised horns.

More atmospheric is ‘From The Shadows,’ which begins gently with Nicholls’ subtly layered astral keyboard pads and assorted percussion noises before gaining traction and developing into an offbeat groove with subtle horn shadings.

The album closes with the band’s recent single, ‘To The Light,’ an upbeat dance groove built on a foundation of driving electric piano and featuring frantic horn lines that reverberate with echoes of the Brecker Brothers and Brass Construction in their prime.

All in all, ‘Forward Thinker’ is a solid sophomore outing from a Scottish band who are evolving nicely and on this evidence, will soon be able to give Incognito a run for their money; and for those who are passionate devotees of British jazz-funk, it should be checked-out post-haste.