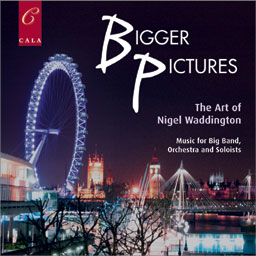 Nigel Waddington is a London-based arranger and for this 12 tracker he’s brought together some of the top names in British jazz to create an album of delightfully contrasting moods. The music is a mix of Waddington originals, which though intensely personal are as universally accessible as the four covers. It’s a cover that kicks things off – a big band version of Barry Finnerty’s ‘You Got It’. It’s not funky in the American down and dirty way but it has a fierce drive pushed by Chris Dagley’s drumming and some wild sax from Greg Heath. The second track – another cover, Nick Home’s ‘I Fly’ is quite another thing. Gentle and soporific, it has something of the mysticism of Van Morrison about it, to which Claire Martin’s unforced vocal is perfectly suited. The two other covers are Johnny Burke and Sammy Van Heusen’s ‘Like Someone To Love’ (Claire Martin on vocals again) and an unusual version of Pat Metheny’s ‘James’ with two trombones (Paul Taylor and Richard Tywell) handling the lead melody.

Of the original Waddington tunes, perhaps the most interesting is ‘Jazz Chops, No Hang Ups’. This one is an unashamed tribute to Steely Dan and features Jacqui Hicks on lead vocal handling a lyric about a session singer who dreams of working with the legendary band. Melody, arrangement and changes are very, very Fagen/Becker- esque… even John Blackwell gets the tone of his guitar just right. Elsewhere, ‘September’ is Waddington’s ‘Ode To Autumn’ (very sombre), ‘Thomas’ (dedicated to his young son) is a gentle piano solo from David Frankel, while ‘Is This A Rainbow’ is the arranger/writer’s way of celebrating his relationship with his wife… see what I meant about “personal”? Then there’s the key-note title cut. Using reeds, strings, xylophones and harps Waddington explores Johnny Dankworth’s observation about jazz being a language not a style and in attempting such he’s achieved a very British sound on the cut… and indeed throughout the album