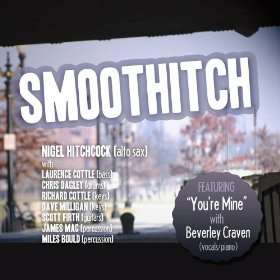 Nigel Hitchcock is a UK jazz sax player. One time lead alto with the National Youth Jazz Orchestra, he’s since worked with all kinds of people and across kinds of genres. He’s led his own band (Itchy Fingers);performed with Tom Jones, Robbie Williams, Mark Knopfler, Gary Barlow and the even Ray Charles; he’s written and recorded albums of library music; he’s worked in Kazakhstan on classical music projects; and he’s even been part of Scottish country music bands (that was during a “time out” period when he lived up on Skye). Now back in London, he’s just released his latest solo set on his own Eight Inch Clock label – an anagram of his name!

The long player’s title says it all… ‘Smoothitch’ is a classic smooth jazz set. There’s nothing here that could cause offence or frighten your maiden aunt. The 11 tracker is a polite and undemanding mix of the up-tempo and the mid-tempo with a sprinkling of slowies for variety. Most interesting of the faster numbers is the opener, ‘Bring It On’. It’s a loose, bumpy, bassy meander that almost gets funky. ‘Anything’s Possible’ is bright too but it just doesn’t ignite, while ‘Ackee And Pattie’ has a Caribbean swagger to it – as, indeed, the title would suggest.

Best of the slowies? Well I’d plump for the atmospheric ‘Shared Dreams’ – mainly because it features some sweet piano (Richard Cottle or Dave Milligan?… the notes don’t specify). The keys are lovingly caressed in the manner of the best of Ramsey Lewis… delightful in its own way. The album’s only vocal features 90s pop star Beverley Craven. The song is her own ‘You’re Mine’ and it’s a pleasant , jaunty pop ditty that sits well with the middle of the road flavours of the rest of the album.