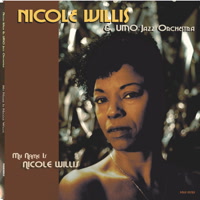 Brooklyn’s Nicole Willis is a proper old school soul singer who now works for part of the year in continental Europe. Without too much fanfare she won loads of fans with her ‘Tortured Soul’ album back in 2013. That was followed by the equally well received ‘Happiness In Every Style’ from which the quite lovely ‘One In A Million’ became a modern soul favourite. On both records Ms Willis was backed by a great band, The Soul Investigators.

On her next outing, an EP in March this year, there was no mention of the Investigators. Now on this new album Nicole shares billing with the 18 piece UMO jazz Orchestra. They’re based in Finland and I’m guessing that’s where this 11 tracker was recorded. If I’m right that might explain the mournful, almost dreary feel to many of the cuts here. I’ve read that Finland like other Scandi countries has a high suicide rate and depression is sometimes said to be endemic… something to do with the long, dark winters. Despite Nicole’s best efforts, some of the music here is rather depressing. I’m thinking of the ‘Introduction’, ‘When We Go Down’ and ‘No Child Denied.’ If we were to be cruel we could describe ’em as “music to slash your wrists to”!

There is one totally new up-tempo cut…. ‘(Everybody) Do The Watusi’. This one is classic Northern soul as is the recycled ‘Break Free (Shake A Tail Feather)’.

My Name Is Nicole Willis is out now.